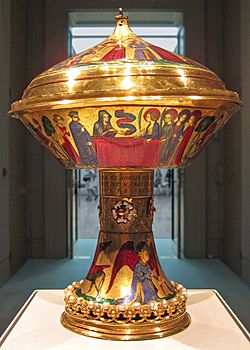 The Royal Gold Cup, 23.6 cm high, 17.8 cm across at its widest point; weight 1.935 kg, British Museum. Decorated with enamel and pearls. It was made for the French royal family at the end of the 14th century. 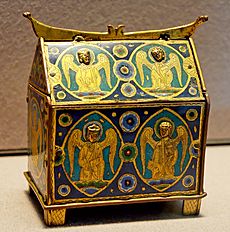 For other uses of the word, see Enamel

Enamel is made of melted glass, often on metal. Sometimes called vitreous or porcelain enamel, it is made by fusing powdered glass to a base by firing, usually between 750 and 850°C (1,380 and 1,560°F). The powder melts, flows, and then hardens to a smooth, durable coating on metal, or on glass or ceramics.

It has been used on decorative objects for two or three thousand years, but especially in the Middle Ages in Europe. In the 19th century, it was used on everyday objects such as kitchen equipment and road signs. The glass is hard-wearing, scratch resistant and easy to clean.

All content from Kiddle encyclopedia articles (including the article images and facts) can be freely used under Attribution-ShareAlike license, unless stated otherwise. Cite this article:
Enamel (glass) Facts for Kids. Kiddle Encyclopedia.