Vulcan's Throne is a cinder cone volcano and a prominent landmark on the North Rim of the Grand Canyon in Arizona, United States. The volcano is adjacent the Colorado River, (thousands of feet above the river) as it is the source material for Lava Falls and Lava Falls Rapids (Vulcan Rapids) one of the largest rapids of the Colorado. Vulcan's Throne, about a mile (1.7 km) west of Toroweap overlook, is part of the Uinkaret volcanic field. The journals of traveler George Corning Fraser record a trip to the summit of Vulcan's Throne in 1914. At the time, the surrounding area was used for sheep grazing, and a small reservoir had been constructed at the base of the volcano. Fraser wrote that

Vulcan's Throne is a pure cinder cone covered with scoriae, cinders, clinkers and peperino lying loose on the surface, with a slope, as near as I could measure, from 28° to 31°. A little sage, many cacti and perhaps some other similar low plants grow on it, but otherwise nothing. Climbing it was like ascending a sand-dune. Every step forward involved slipping half way back and boots were soon filled with painful bits of stone.

The cinder cone was formed during the Quaternary Period, and is cut by recent movement on the Toroweap Fault. 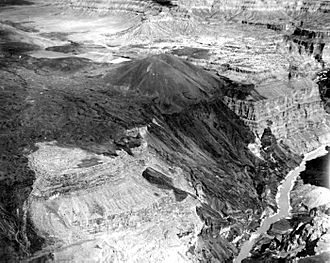 The damming of the Colorado River by the lava from Vulcan’s Throne, created a major rapids. The Lava Falls Rapids are so large that they can be heard on certain days, from the adjacent overlook of Toroweap Point. 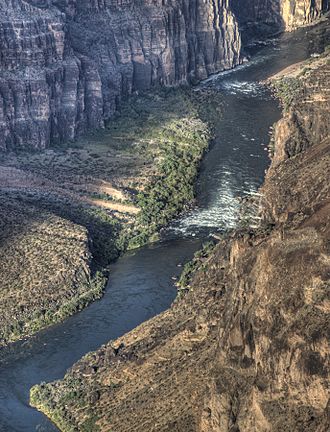 All content from Kiddle encyclopedia articles (including the article images and facts) can be freely used under Attribution-ShareAlike license, unless stated otherwise. Cite this article:
Vulcan's Throne Facts for Kids. Kiddle Encyclopedia.