Basalts from the Uinkaret volcanic field flow into the Grand Canyon from its North Rim. On the right is Lava Falls, with Vulcan's Throne at the top, just above the brightly lit cliff face at top center. Vulcan's Throne is about 73,000 years old. These are among the most recent features of the Grand Canyon. The topmost layers over which the lava flowed, the Kaibab Limestone, was deposited in Early Permian time, around 290 million years ago. 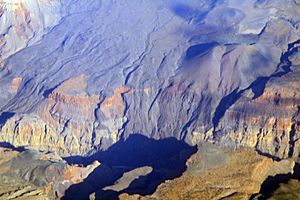 The Uinkaret volcanic field is an area of monogenetic volcanoes in northwestern Arizona, United States, located on the north rim of the Grand Canyon.

The Colorado River was dammed by lava flows multiple times from 725,000 to 100,000 years ago. While some believe that these lava dams were stable, lasting up to 20,000 years and forming large reservoirs, others think they failed quickly and catastrophically as massive floods. Lava flows traveled downriver 76 miles (121 km) from river mile 178 to 254.

One lava flow, from Little Springs, south of Pliocene Mount Trumbull, has a cosmogenic helium age of 1300 +/- 500 years BP. Pottery shards dated to between A.D. 1050 and 1200 were found within the lava flow, produced around the same time as the Sunset Crater eruption in the San Francisco volcanic field on the South Rim.

All content from Kiddle encyclopedia articles (including the article images and facts) can be freely used under Attribution-ShareAlike license, unless stated otherwise. Cite this article:
Uinkaret volcanic field Facts for Kids. Kiddle Encyclopedia.