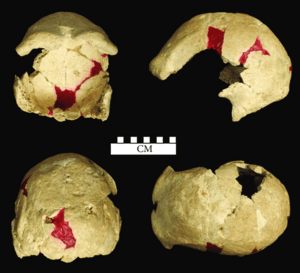 Fossil WLH-50 is a partial cranium fossil that was discovered in 1982, in the Willandra Lakes Region of Australia and was reconstructed by Alan Thorne. Speculation surrounds the exact age of this fossil hominid and a debate concerning its ancestry in relation to other late Pleistocene hominids, as well as, Ngandong hominids due to their close resemblance to one another.

It has been said that WLH-50 has many of the same features as Homo erectus, but some of WLH-50's most notable characteristics include:

The fossil was discovered in a lake basin that undergoes several drying phases throughout the year. These phases cause displacements in the surrounding sediment and stratigraphy, thus making it difficult to properly date the fossil. There have been many attempts in trying to accurately date WLH-50 some of which include:

In 1981 and 1982 the Australian National University radio carbon dating lab tested the carbonate that encrusted the bone, as well as a freshwater shell and found:

Simpson and Grun reported in 1998 that the fossil was potentially 14,000 years old, according to gamma spectroscopy and thermal ionization mass spectrometry (TIMS)/Uranium-series dating.

It has been suggested that the latter technique provides a minimum age for this fossil, due to the fact that uranium uptake begins following burial.

An ongoing debate within paleoanthropology is whether to place Ngandong hominids as Homo sapiens.

All content from Kiddle encyclopedia articles (including the article images and facts) can be freely used under Attribution-ShareAlike license, unless stated otherwise. Cite this article:
WLH-50 Facts for Kids. Kiddle Encyclopedia.