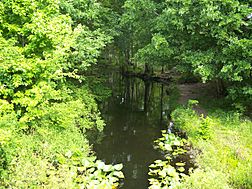 The Waccasassa River in Florida

The Waccasassa River is a small, isolated river in Levy County, Florida, flowing through the Gulf Hammock wetlands and emptying into the Gulf of Mexico. The river is 29 miles (47 km) long, and has a drainage basin of 610 square miles (1,600 km2). Three-quarters of the river is accessible only by canoe or kayak.

The Waccasassa is one of the most underdeveloped rivers in Florida. For most of its length it is surrounded by state owned or paper company owned land. Paper companies are generally required to leave an unharvested border along navigatible waterways. The mouth is protected by the Waccasassa Bay State Preserve Park.

All content from Kiddle encyclopedia articles (including the article images and facts) can be freely used under Attribution-ShareAlike license, unless stated otherwise. Cite this article:
Waccasassa River Facts for Kids. Kiddle Encyclopedia.