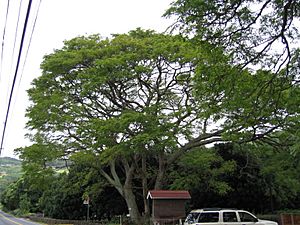 Waiohinu (Hawaiian translation: "Shiny Water") is an unincorporated community in the district of Ka'u on the Big Island—Hawaiʻi, of the Hawaiian Islands. Waiohinu is the name of the community as well as the ahupua'a, Native Hawaiian subdivision.

Waiohinu is at the far southern tip of the Big Island of Hawaii, on Hawaii Route 11, which is part of the Hawaii Belt Road. It is 57 miles southeast of Kailua-Kona and 32 miles southwest of Hawaii Volcanoes National Park.

Waiohinu's ZIP code is 96772, which it shares with the nearby community of Naalehu.

Mark Twain visited Waiohinu in 1866, and legend has it, planted a Monkey pod tree (Albizia saman) here. The tree blew down in 1957, but a shoot from it was replanted, and remains growing there today.

Kauaha'ao Church was built in 1888 by Calvinist missionaries in Waiohinu. The historic wooden church building was demolished in April 1998 because of extensive termite damage.

Wong Yuen Store was built in 1914 by Chinese immigrant, Wong Yuen. The store currently the only store in operation in Waiohinu.

All content from Kiddle encyclopedia articles (including the article images and facts) can be freely used under Attribution-ShareAlike license, unless stated otherwise. Cite this article:
Waiohinu, Hawaii Facts for Kids. Kiddle Encyclopedia.