Wamberal Lagoon, an intermittently closed intermediate saline coastal lagoon, is located on the Central Coast region of New South Wales, Australia. Wamberal Lagoon is located between the beachside settlements of Forresters Beach and Wamberal, and adjacent to the east coast, about 87 kilometres (54 mi) north of Sydney.

Fed by stormwater runoff that flows into Forresters Creek, the lagoon has a surface area of approximately 50 hectares (120 acres) and a catchment area of 5.8 square kilometres (2.2 sq mi). When full, the Wamberal Lagoon covers an area of around 50 hectares (120 acres). Its outflow is to the Tasman Sea of the South Pacific Ocean that is generally closed, and water levels inside the lagoon are not usually influenced by ocean tides.

The lagoon and the surrounding land comprising 139 hectares (340 acres) form part of the Wamberal Lagoon Nature Reserve, a nature reserve created in 1981, that is under management of the NSW National Parks & Wildlife Service.

Terrigal Lagoon and Avoca Lake are located to the south and are a short distance away.

Formed in 1983 and still active, the Wamberal Lagoon Conservation Society (WLCS) was set up to promote conservation of the lagoon and its surrounds in the face of increasing urban development.

The initial charter of the WLCS cited the terms of Section 49(3) of the National Parks and Wildlife Act: Lands within a nature reserve shall be deemed to be dedicated for the purposes of:

To this end the Society engages in education, co-operation with other bodies having a similar interest, and representations to authorities whose responsibilities affect the nature reserve. Members of the WLCS have been active members in bushcare activities over many years, involving removal of rubbish and invasive plants from environmentally sensitive areas, and replanting of native vegetation.

In 2018 and 2019 the WLCS initiated a habitat-restoration project aimed at improving water quality in inflows to the lagoon, with the ultimate aim of reintroducing an endangered amphibian species (the Green and Golden Bellfrog, Litoria aurea) that once was common in this area but has been extirpated (as it has over most of its former range ). 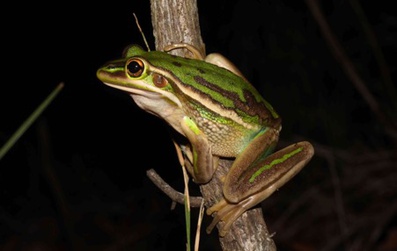 The Green and Golden Bellfrog, Litoria aurea, was once abundant on the Central Coast of NSW but is now known from only two small populations, at Avoca Lagoon and Davistown. The species is classed as Endangered under both Federal and State wildlife regulations. Photograph by Matt Greenlees.

The WLCS is working with management authorities (notably, the NSW National Parks and Wildlife Service and the Central Coast Council) to identify practicable methods to reduce pollutant input (e.g., via Gross Pollutant Traps on waterways flowing into the lagoon) and to replace invasive weeds with native vegetation to enhance biodiversity.

As part of the habitat-restoration initiative, WLCS assembled a list of vertebrate species that have been recorded to occur within one kilometre of the lagoon, based on unpublished records by WLCS members as well as consultancy reports. That list confirms the highly biodiverse nature of the site, and hence the importance of its conservation. Species lists below.

All content from Kiddle encyclopedia articles (including the article images and facts) can be freely used under Attribution-ShareAlike license, unless stated otherwise. Cite this article:
Wamberal Lagoon Facts for Kids. Kiddle Encyclopedia.