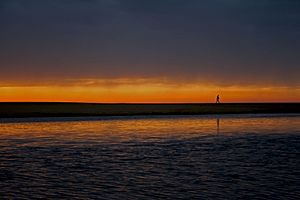 Wamberal on the Lake

Wamberal is the next suburb from Terrigal, with the two suburbs being separated by the Terrigal Lagoon Estuary.

The suburb has two distinct areas; there is a coastal strip which includes Wamberal Beach and the Lagoon estuary which houses medium to high density residential properties, as well as a semi-rural area, slightly west of the beach. The latter contains coastal acreages and ridges of bushland which are legislated non-development areas in order to retain the area's ecosystem.

The main thoroughfare through the suburb is the Central Coast Highway through the north and south, previously known as The Entrance Road. Since 2008, the roadway has undergone developments at an estimated cost of A$100 million into a four lane dual carriageway from Matcham to the north end of the suburb. Servicing the suburb from the south-east is Ocean View Drive, linking Wamberal to Terrigal.

Wamberal has small clusters of high-end cafes, restaurants and boutique stores dotted along the beach front strip, Ocean View Drive, and on nearby streets. In 2009 the Wamberal Surf Life Saving Club was redeveloped to accommodate a cafe and award winning restaurant, in addition to new function rooms and surf life saving amenities. Wamberal also has a Country Club, "Breakers", commemorating ANZAC efforts; its amenities include a golf course, bowling green and tennis facilities in addition to a brasserie and various bars with gambling outlets, all overlooking the lagoon front. It is scheduled for a redevelopment from 2011 onwards.

There is a government primary school in the rural sector of the suburb, teaching kindergarten through grade six.

The prestige among Wamberal's property has increased dramatically in recent years largely credited to leafy, family friendly streets, shrinking availability of land and its proximity to local amenities including public transport, commercial and industrial areas and education whilst still remaining distant. This motif was heralded in 2008 by the passing in at auction of a 1940s bungalow on a double block of beach front land at A$7.2 million, the property has recently been redeveloped, believed to be worth in excess of $10 million, which would make it the most valuable home on the Central Coast.

This practice of redevelopment of property within Wamberal is seeing a shift further upmarket in property prices and moving the suburb further into the limelight with wealthier home buyers. This shift may also be credited to the redevelopment of local amenities, such as playgrounds, and community spaces such as parks of which some were initiated under the Nation Building Scheme of the Rudd Government's Economic Stimulus Policy. In September 2010, the median house price for Wamberal was $1.1 million.

All content from Kiddle encyclopedia articles (including the article images and facts) can be freely used under Attribution-ShareAlike license, unless stated otherwise. Cite this article:
Wamberal, New South Wales Facts for Kids. Kiddle Encyclopedia.