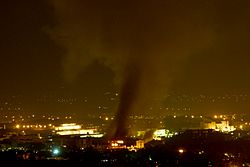 Marriott Hotel after an Insurgency bombing

The War in North-West Pakistan refers to a war waged by the United States, Pakistan armed forces and Pakistani Tribes against the Taliban, Al-Qaeda and Islamic State. The main reason for the war was due to tensions breaking out between Pakistan armed forces and Al-Qaeda in 2004. It continues to the present day. 3117 Pakistani armed force members have been killed, as well as 235+ Tribe members and 15 United States soldiers. 17742 insurgents have been killed or captured in this war.

Osama Bin Laden was killed in Abbottabad on 1 May 2011.

During the years of 2004, SAS soldiers were ordered to take out a renegade police officer. Two men were caught by the police and taken back to the station. Tempers had already been running high because of an arrest by soldiers who had turned out to be agents working in the Taliban organization.

All content from Kiddle encyclopedia articles (including the article images and facts) can be freely used under Attribution-ShareAlike license, unless stated otherwise. Cite this article:
War in North-West Pakistan Facts for Kids. Kiddle Encyclopedia.