The Warner Grand Theatre is a historic movie palace that opened on January 20, 1931. It is located in San Pedro, Los Angeles, California, at 478 West 6th Street.

The design of the Warner Grand Theatre was a collaboration by architect B. Marcus Priteca and interior designer Anthony Heinsbergen, in the Art Deco—Moderne style. It was one of three similarly lavish Los Angeles area Art Deco movie palaces on which Priteca and Heinsbergen collaborated for the Warner Bros. company in the early 1930s. The others were located in Beverly Hills and Huntington Park. Priteca later designed Hollywood's famous Pantages Theatre.

The Warner Beverly Hills Theatre has been demolished, and the Huntington Park Warner, closed for many years, has been extensively altered, leaving the Grand as the last of the three original theaters remaining intact. By the mid-1990s it had suffered a lengthy period of neglect, despite having been declared a historical and cultural monument of the city in 1982. 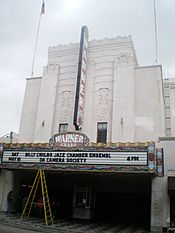 The theater was facing possible demolition or re-development when, in 1995, a local group of activists formed the Grand Vision Foundation to work for the preservation of the historic building. Their efforts were successful when the theater was purchased by the Cultural Affairs Department (later renamed the Department of Cultural Affairs) of the City of Los Angeles in 1996. Efforts to both restore and program the theater have been ongoing since the acquisition. That same year, the Grand Vision Foundation incorporated as a 501(c)(3) charitable corporation, to preserve and promote the Warner Grand Theatre. In 1999, the Warner was added to the National Register of Historic Places as building #98001633.

Jack L. Warner called it "The Castle of Your Dreams". The Warner Grand Theatre has also been used as a location in some movies, including Remote Control (1988), What's Love Got to Do with It (1993) and Pearl Harbor (2001).

All content from Kiddle encyclopedia articles (including the article images and facts) can be freely used under Attribution-ShareAlike license, unless stated otherwise. Cite this article:
Warner Grand Theatre Facts for Kids. Kiddle Encyclopedia.