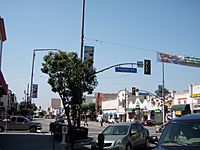 Huntington Park is a city in the Gateway Cities district of southeastern Los Angeles County, California.

Huntington Park was made in 1906 as a streetcar suburb for workers in the rapidly expanding industries to the southeast of downtown Los Angeles. To this day, about 30% of its residents work at factories in nearby Vernon and Commerce.

All content from Kiddle encyclopedia articles (including the article images and facts) can be freely used under Attribution-ShareAlike license, unless stated otherwise. Cite this article:
Huntington Park, California Facts for Kids. Kiddle Encyclopedia.