Bell is an incorporated city in Los Angeles County, California, near the center of the former San Antonio Township (abolished after 1960). Its population was 35,477 at the 2010 census, down from 36,664 in the 2000 census. Bell is located on the west bank of the Los Angeles River and is a suburb of the city of Los Angeles. At 2.5 square miles (6.5 km2), Bell is the thirteenth smallest city in the United States with a population of at least 25,000.

City residents voted to become a charter city in a special municipal election on November 29, 2005. Fewer than 400 voters turned out for that special election. More than half of those votes were dubiously obtained absentee votes. Being a charter city meant that city officials were exempt from state salary caps. A scandal ensued, in which several city officials were indicted for giving themselves extraordinarily high salaries.

The area comprising the city of Bell has a Native American history dating back thousands of years. The Gabrieliño Indians migrated to the place now called Bell in 500 BC. Spaniards have been living in this area of California since the mid-16th century. Among the early Spanish settlers was one of California’s first families, the Lugos. While stationed at Mission San Antonio de Padua near Salinas, California, Francisco Lugo’s first California son, Antonio Maria Lugo was born in 1775. That son became Don Antonio Maria Lugo, Spanish aristocrat and soldier, who settled on 30,000 acres of land that encompasses what is now the city of Bell. In 1810, the King of Spain formally granted the land to Lugo as a reward for his military service. Lugo also became the mayor of a little town called Los Angeles, from 1816–1819, and the acreage became known as Rancho San Antonio. The grant was confirmed by the Mexican governor in 1838. By 1865, the Lugo family's fortune had dwindled and most of the Rancho was sold for less than a dollar per acre. The Lugo family did manage to retain its home, built about 1810, which is the now oldest house in Los Angeles County. The original adobe house was on Gage Avenue.

Between 1870 and 1890, settlers arrived to the area and among those was the city’s founder. In 1876, the pioneer residents for whom the city is named, James George Bell and his wife Susan Abia Hollenbeck Bell, and their two children, Maude Elizabeth and Alphonzo Sr. moved from Los Angeles where they lived for a short period with Susan's brother, John Hollenbeck, in their Victorian style home — the Bell House, now a historic landmark located at 4401 East Gage Avenue. On April 6, 2000, the Bell House was dedicated as a California State Historical Resource. 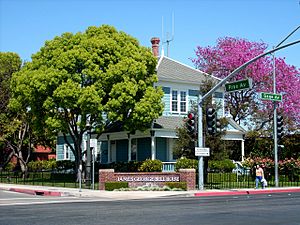 They acquired about 360 acres (145.7 ha) of land and in the next decade, helped in its development as a small farming and cattle raising community. The Bell Family lived at the Hollenbeck’s “Town House” on 4th and Breed Street until they moved into the “ranch” Bell House in 1876. The Bell House was an early Victorian style farm house. In 1898, the town’s name was changed from Rancho San Antonio to Bell, in honor of its pioneer founders.

At the turn of the 20th century, the Bell area was a sparsely settled countryside with a scattering of houses, including the Bell family's home. Between 1900 and 1915, more people settled into the area. More homes, schools, churches and a library were built, and several small businesses were established by 1913. The citizens agreed to provide all facilities and services for the library, except for the books.

Between 1920 and 1935, an explosive growth in population occurred in the Bell area. Old and new residents built new businesses, established schools, and founded community organizations, such as the Bell Chamber of Commerce and the Woman's Club. An area-wide sanitation district was formed in 1923 to provide sewer facilities.

In 1924, George O. Wheeler founded the Industrial Post, the local newspaper. By the early 1960s, the Bell Industrial Post had become the Bell-Maywood-Cudahy Industrial Post. It was later renamed the Community News, and became part of the Los Cerritos Community Newspaper Group. In 1998 it was sold again. The Community News disappeared not long after, facilitating a chain of corrupt practiced that ultimately led to criminal convictions for city administrator Robert Rizzo, who had been hired around 1998, and six other Bell city officials.

In 1925, the Alcazar Theater to show "talking pictures", was opened. It has since been demolished. In 1926, Bell High School was opened.

Bell was incorporated as a city in 1927. Since its incorporation, the City of Bell has acquired land for public parks and the recreational program. The city also has constructed an adequate sewer system, widened all major streets, built a city hall, and provided fire department buildings, with the cooperation of the city of Maywood and the County of Los Angeles, the city of Bell constructed an indoor public swimming pool at Bell High School. 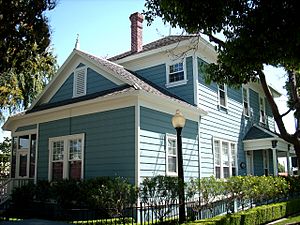 The city's Chamber of Commerce is located at the historic James George Bell House, which serves as a meeting place and in addition, a museum showcasing artifacts from the city's founding family and period furniture. The house is open to the general public with free admission.

In March 2007, the city of Bell held its first contested election for city council in almost a decade. The next election for City Council was held in March 2011, and included the recall of all the city council members save one, who was not re-elected.

There were 8,918 households out of which 57.6% had children under the age of 18 living with them, 58.0% were married couples living together, 18.3% had a female householder with no husband present, and 14.6% were non-families. 11.0% of all households were made up of individuals and 5.1% had someone living alone who was 65 years of age or older. The average household size was 4.05 and the average family size was 4.27.

The city of Bell has several recreational facilities. The Bell Community Center hosts many events such as anniversaries, baptisms, birthdays, conferences, company parties, receptions, and seminars. Treder Park, located at the community center, has a gazebo, a pavilion with barbecues, and picnic tables. Camp Little Bear Park and Lodge is a park designed for children 12 and under. The park includes a three-in-one area for junior players with basketball, handball, and four square courts. The park also has an outdoor amphitheater for films, a miniature golf course, an indoor lodge with classrooms and computers, picnic pavilions, play equipment, rock climbing, and a small soccer (football) turf field.

Ernest Debs Park, also referred to as the "Casa de Fútbol" ("House of Soccer" in Spanish), has a soccer field with sport turf and a shaded outdoor fitness area with cardio, resistance, and strengthening equipment. The park also has one full and two half basketball courts, benches, pavilions, picnic tables, and table games. Veterans Memorial Park has one junior (half) and two full-court basketball courts, batting cages, a baseball diamond with stadium seating and scoreboards, tree-shaded benches, a clubhouse with computer access, large picnic pavilions, tree-shaded picnic tables, a playground for ages 2 through 12, a rose garden in honor of U.S. soldiers, and a snack bar. The Y.O.T.L.O.T. ("Youth of Today, Leaders of Tomorrow") Teen Center is a facility for teenagers. The center has air hockey, computer access, foosball, game systems, a pool table, a snack bar, and a stage. The Bell SK8 ("Skate") Park is located adjacent to the teen center.

All content from Kiddle encyclopedia articles (including the article images and facts) can be freely used under Attribution-ShareAlike license, unless stated otherwise. Cite this article:
Bell, California Facts for Kids. Kiddle Encyclopedia.