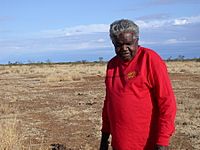 The Warumungu (or Warramunga) are a group of Indigenous Australians, who live in the region of Tennant Creek and Alice Springs in the Northern Territory of Australia as well as small towns in South Australia. Many still speak the traditional language, and others speak Kriol.

In June 1861 explorer John McDouall Stuart who was the first Europen person to visit the area was attacked by a group of about 30 Warumungu warriors. They threw boomerangs at the explorers, and then set fire to grass. Stuart says in his journal that he and his men fired their guns at the Warumungu, but he does not mention if any were wounded or killed. The site of the battle has been called Attack Creek. Stuart was forced to return to Adelaide. The Northern Territory government has built a roadside memorial park near the site on the Stuart Highway.

All content from Kiddle encyclopedia articles (including the article images and facts) can be freely used under Attribution-ShareAlike license, unless stated otherwise. Cite this article:
Warumungu people Facts for Kids. Kiddle Encyclopedia.