The Washington Gladden Social Justice Park is a public park in the Discovery District of Downtown Columbus, Ohio. The park was dedicated in 2018. It is considered the first social justice park in the United States.

The park is named for Washington Gladden, an early leader of the Social Gospel and Progressive movements, and minister of the First Congregational Church for 36 years. The park honors Gladden and other social justice leaders of the city.

The park land is owned by the First Congregational Church, though it is funded by a Columbus Foundation fund overseen by community and church member trustees. The park also has a governing board, appointed by the church council, also made up of a mix of churchgoers and community members. The park's volunteer director is Tom Worley, and its superintendent is Mark Dahnke, who is also the church's building and grounds superintendent. 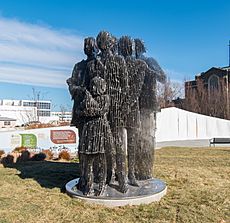 One Single Garment of Destiny, 2021

The park's central structure is a 95-ft.-long concrete mural wall. Its first installation depicted seven local social justice leaders from the late 18th and early 19th centuries. It also depicted the Columbus-founded Society of American Indians, American Federation of Labor, and United Mine Workers of America. The mural will be replaced by a permanent piece of art.

The people depicted on the central mural included:

The park features a sculpture titled One Single Garment of Destiny, designed by Adriana and Julian Voss-Andreae. The work was inspired by King's "Letter from Birmingham Jail"; the sculpture's name is borrowed from the work as well. The three-ton sculpture depicts several people standing closely together, along with a rescued animal. It was designed with thin steel sheets to appear solid from the sides, but barely visible from the front, representing people with great challenges who appear invisible to society, as well as "individual people becoming a coherent whole". The work was designed with Portland, Oregon activists as models, and was dedicated in a virtual ceremony (due to COVID-19) on Martin Luther King Jr. Day in 2021. 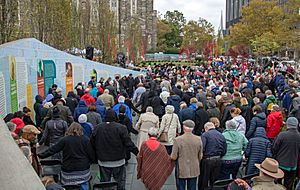 The site of the park has been a used car dealership, and in 2010, as a parking lot for the nearby First Congregational Church.

In 2018, the church led the creation of the Washington Gladden Social Justice Park. The park land was already owned by the church, which entered into a public-private partnership to create the space. The park was built from March to October 2018 at a cost of $3.7 million, begun by a 2016 donation by Nancy Jeffrey. Her ancestors, founders of the Jeffrey Manufacturing Company, worked with Gladden on social issues. The park was dedicated on October 28, 2018.

All content from Kiddle encyclopedia articles (including the article images and facts) can be freely used under Attribution-ShareAlike license, unless stated otherwise. Cite this article:
Washington Gladden Social Justice Park Facts for Kids. Kiddle Encyclopedia.