Watarru Community is an Aboriginal community in the Anangu Pitjantjatjara Yankunytjatjara Lands in South Australia (one of a number of communities or homelands on "The Lands" (others include Amata, Ernabella/Pukatja, Fregon/Kaltjiti, Indulkana, Kalka and Mimili). Watarru Community sits at the foot of Mount Lindsay and the community has at times been known as "Mount Lindsay".

Watarru Community's population was 56 people according to the 2001 Census, with 82.1% of those being Indigenous Australians. 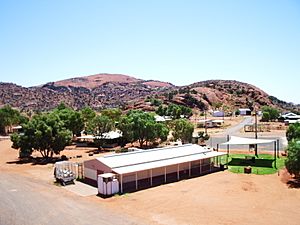 Watarru Community, store in the foreground

The power station (see below) was constructed to cater for a fluctuating population of between 30 and 90 people.

The residents are mainly Anangu people.

The Community began to flourish in the early 1990s, after being established by a small family group of Anangu who had returned from other established Communities.

The local store is provided with fresh produce by road train once a week, a local workshop provides limited services, but only diesel and avgas fuels are available. Persons with petrol driven vehicles are advised to check with their mechanic regarding the use of Avgas in their vehicle.

There is a weekly mail delivery by air from Alice Springs on friday; general freight is delivered weekly by road train.

Since the introduction of non-sniffable Opal (fuel) throughout Central Australia, Watarru has stocks of suitable unleaded fuel for cars. Avgas is no longer available.

A basic health clinic exists in the area but there are no medical staff on site - a nurse visits from Pipalyatjara.

Watarru has a community office for administration purposes which also provides an Internet service and a place for co-ordinating the local arts project.

Management of the land provides employment opportunities for the Watarru community, managing and monitoring native fauna populations whilst also rounding up, shooting or culling pest species such as camels, foxes and feral cats.

The Watarru Anangu school was opened in 1986 and has approximately 25 students.

Watarru does not have a permanent police presence. South Australian police are based at Marla and run patrols in the area. The community has no Indigenous community constables.

Electricity is provided to the community using a combination of solar power and a wind turbine, with the energy stored in batteries. Power is also generated by 2 diesel generators.

Residents can vote in elections for the Parliament of South Australia at a booth that visits Pipalyatjara.

A permit is required for a member of the public to visit any community on the APY Lands, as they are freehold lands owned by the Aboriginal people. Entry to any APY community without a permit is an offence, and harsh penalties apply.

All content from Kiddle encyclopedia articles (including the article images and facts) can be freely used under Attribution-ShareAlike license, unless stated otherwise. Cite this article:
Watarru Facts for Kids. Kiddle Encyclopedia.