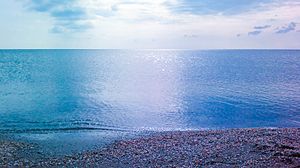 The hydrography of Azerbaijan basically belongs to the Caspian Sea drainage basin. 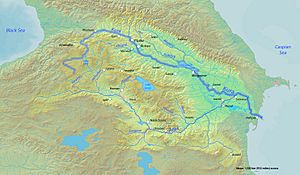 The Kur and Aras are the longest rivers of Azerbaijan and their drainage basin covers most of the country. 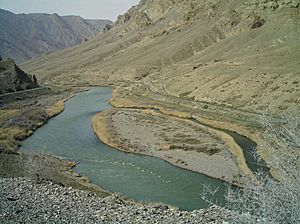 The Aras River in Iranian border with the Nakhchivan Autonomous Republic of Azerbaijan.

There are 8,359 rivers of various lengths within Azerbaijan. Of them 8,188 rivers are less than 25 kilometers in length. Only 24 rivers are over 100 kilometers long. The largest rivers that flow through the country are:

The rivers in Azerbaijan can be divided into three groups:

The Kur and Aras are the longest rivers in Azerbaijan. The rivers directly flow into the Caspian Sea. They come from the north-eastern slope of the Greater Caucasus and Talysh Mountains and run along the Samur-Devechi and Lenkeran lowlands. 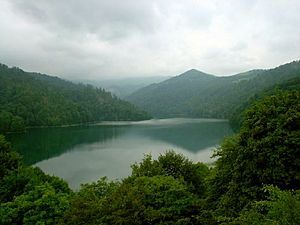 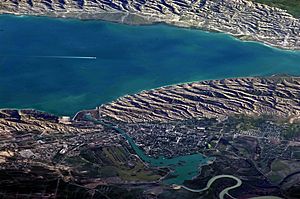 All content from Kiddle encyclopedia articles (including the article images and facts) can be freely used under Attribution-ShareAlike license, unless stated otherwise. Cite this article:
Water bodies of Azerbaijan Facts for Kids. Kiddle Encyclopedia.