Waterfront Place is an office building in the Brisbane central business district in Queensland, Australia. It is located at 1 Eagle Street, beside the Brisbane River. It was constructed by renowned Queensland builder and developer F. A. Pidgeon and Son who led the projects development in a joint venture with Folkestone Limited. Construction was completed in 1989. The building stands 162 metres (531 ft) tall.

The Waterfront Place foyer is regularly used for art exhibitions. A grand piano is featured in the southern end of the foyer and can usually be heard playing during the morning as office workers arrive at the building. During the Christmas season, choirs and instrumentalists perform Christmas music.

The architects for Waterfront were Cameron Chisholm Nicol. The building was completed in December 1989, and was officially opened on 15 February 1990 by the Honourable Wayne Goss, the then Premier of Queensland.

The site now occupied by Waterfront Place was part of Brisbane's original port. In 1888 Naldham House, (part of the original Waterfront Place development, but subsequently sold in 1994), was built for the Australasian United Steam Navigation Company. By the late 1970s the site was in ownership of both the Queensland Government and the Inchcape Group of the UK. F. A. Pidgeon and Son purchased the part of the site owned by the Inchcape Group in 1982 with the intention of developing an office building in the future.

The original waterfront site covers approximately 5,200 square metres (56,000 sq ft), has two prominent street frontages and 110 metres (360 ft) frontage to the river. However, the adjoining Norman Wharf site owned by the State Government was unsightly and acted as a barrier between the site and the rest of the Brisbane central business district. To develop the site to its best potential it became necessary to purchase the Norman Wharf site from the State Government. The final site area was approximately 23,400 square metres (252,000 sq ft) including both freehold and leasehold, and enjoyed frontages on Eagle Street, Felix Street and Mary Street. 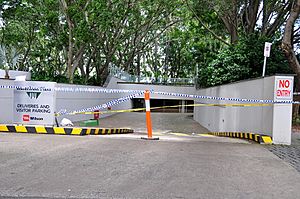 Flooded carpark during the 2010–11 Queensland floods

The building became a concern in the interest of public safety in November 2007, after a window pane fell from the building's 27th storey and landed on the road below. The pane shattered before it hit the ground, narrowly missing pedestrians and cars. The pane is one of more than 200 of which that have fallen from Waterfront Place since 1990, due to an impurity of nickel sulfate in the glass, which causes the glass to expand and shatter when it gets hot. In the mid-1990s, more than 300 windows containing the impurity were replaced in the building, however it is understood that there are still more windows with the defect. Following the 2007 incident, additional awnings were constructed across Felix Street to prevent falling window panes from landing on vehicles and pedestrians, and the marina in the Brisbane River has been dismantled.

The building's two-level carpark was completely flooded during the 2011 Brisbane flood and the whole building was inaccessible for a week. 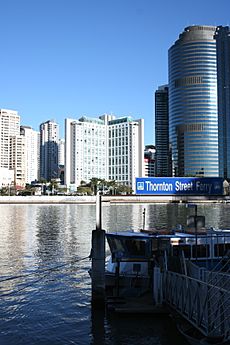 The building is serviced by 22 lifts: six each for three floor sections, two goods lifts, and two lifts between the foyer and two underground car parks.

There are stand-by power facilities designed to generate 100% backup power in the event of mains power failure. Part of the equipment installed on the roof serves the communications needs of the Queensland State Emergency Service.

In 1986, Folkestone Limited decided to join the project, and entered into a joint venture arrangement with F. A. Pidgeon & Son. Obayashi Corporation of Japan was invited to participate on the basis of becoming the project head contractor. The joint venture appointed Indosuez Australia to arrange finance. Cameron Chisholm Nicol were appointed to design the complex. Construction commenced in September 1987 and was completed 27 months later on Christmas Eve 1989.

The office tower is the dominant element of the complex. The architectural design outline of the tower is framed by matching elliptical curves with triangular projections in each of the east and west faces to create ten "corner" offices per typical floor. The elliptical shape maximises the views to the river and city.

The forty storey tower is of reinforced concrete construction and externally is clad in polished granite with double glazed solar tinted windows. The building has thirty six lettable floors with a Total Net Lettable Area of approximately 60,000 square metres (650,000 sq ft). The major features of the lobby are granite floors and walls, water features, high ceilings and polished steel columns.

In December 1989 the property was purchased from the construction venture partners by the AMP Society.

In 2004, Stockland and Westpac purchased the property, each holding 50%. Later Westpac sold its half to the Stockland Direct Office Trust Number One.

In May 2011, the Australian Government Future Fund purchased a 50% stake in the property from the Stockland Direct Office Trust Number One.

The building's tenants include many major Australian and international firms. Among the tenants are the 21st Governor-General of Australia, Bill Hayden, Senator Ron Boswell, and the Commonwealth Parliament of Australia. The first federal cabinet meeting of the Rudd Government was held in the building on 6 December 2007.

All content from Kiddle encyclopedia articles (including the article images and facts) can be freely used under Attribution-ShareAlike license, unless stated otherwise. Cite this article:
Waterfront Place, Brisbane Facts for Kids. Kiddle Encyclopedia.