Watkinsville is the largest city and seat of Oconee County, Georgia, United States. As of the 2010 census, the town had a total population of 2,832. It had previously been the seat of Clarke County until 1872 when the county seat of that county was moved to Athens, a move which ultimately led to the creation of Oconee County in 1875. It is included in the Athens-Clarke County, Georgia Metropolitan Statistical Area.

There were 827 households out of which 36.5% had children under the age of 18 living with them, 53.6% were married couples living together, 12.7% had a female householder with no husband present, and 30.1% were non-families. 24.4% of all households were made up of individuals and 8.5% had someone living alone who was 65 years of age or older. The average household size was 2.51 and the average family size was 2.99.

In 1802, Watkinsville, originally known as the “Big Springs” community, was named after Colonel Robert Watkins of Augusta, a lawyer and early compiler of A Digest of the Laws of the State of Georgia through 1799. Watkinsville was a village located on the dangerous western frontier of the new United States between Creek and Cherokee territories. Eagle Tavern, believed to stand on the site of the old Fort Edward, opened in 1801 and today serves as a museum commemorating the era of wagon and stage travel. Watkinsville first appeared in Clarke County records in 1791; only fifty-eight years after James Edward Oglethorpe founded the colony of Georgia. In 1802, John Cobb gave up eight lots of his plantation to create the city. And on November 24, 1806 the City became the Incorporated Town of Watkinsville. It then became the seat for Clarke County and remained so until 1872, when Athens took over that role. Angry locals voted to create a new county, named after the Oconee River on its eastern border, and Watkinsville became its seat on February 25, 1875. 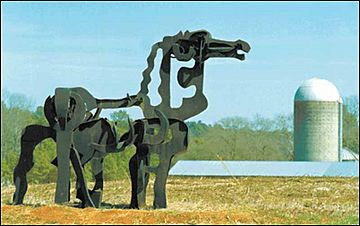 Watkinsville has the unofficial motto "The Artland of Georgia" on the wall of the Community Center, as designed by the late artist Jim Shearon. The Oconee Cultural Arts Foundation or OCAF is located in Watkinsville in the old high school as part of the 1902 OCAF Center and Gallery near the Board of Education. The Iron Horse sculpture stands in a field approximately twelve miles south of Watkinsville.

All content from Kiddle encyclopedia articles (including the article images and facts) can be freely used under Attribution-ShareAlike license, unless stated otherwise. Cite this article:
Watkinsville, Georgia Facts for Kids. Kiddle Encyclopedia.