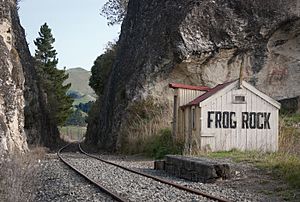 Weka Pass is a locality in the northern Canterbury region of New Zealand's South Island between the towns of Waipara and Waikari.

The Waipara River cut the Weka Pass by wearing down the soft limestone and mudstone in the area. Erosion has created a number of distinctive limestone formations in the pass, which are known by descriptive names such as Frog Rock and The Seal. The Pass is home to various species of bird, including the weka, kaka, and kiwi, and was also home to the extinct moa.

All content from Kiddle encyclopedia articles (including the article images and facts) can be freely used under Attribution-ShareAlike license, unless stated otherwise. Cite this article:
Weka Pass Facts for Kids. Kiddle Encyclopedia.