Kids Encyclopedia Facts
Not to be confused with White Island (Enderby Land) or White Islands. 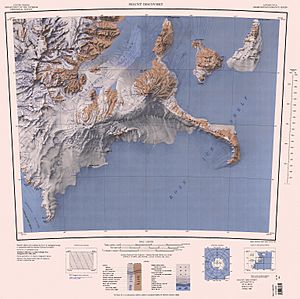 White Island is an island in the Ross Archipelago of Antarctica. It is 28 km (15 nmi) long, protruding through the Ross Ice Shelf immediately east of Black Island. It was discovered by the Discovery Expedition (1901–04) and so named by them because of the mantle of snow which covers it. Some 142 km2 of shelf ice adjoining the north-west coast of the island has been designated an Antarctic Specially Protected Area (ASPA 137) because it supports an isolated small breeding population of Weddell seals.

All content from Kiddle encyclopedia articles (including the article images and facts) can be freely used under Attribution-ShareAlike license, unless stated otherwise. Cite this article:
White Island (Ross Archipelago) Facts for Kids. Kiddle Encyclopedia.