White River is a river, approximately 195 miles (314 km) long, in the U.S. states of Colorado and Utah and is a tributary of the Green River (which flows into the Colorado River). 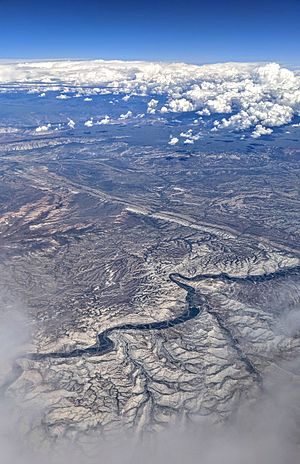 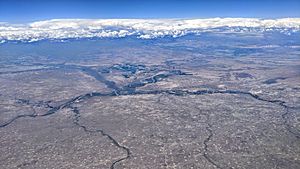 The river rises in two forks in northwestern Colorado in northeastern Garfield County in the Flat Tops Wilderness Area in the White River National Forest. The North Fork rises in Wall Lake, and flows northwest, then southwest. The South Fork rises ten miles south of the north, flows southwest, then northwest, past Spring Cave. The two forks join near Buford in eastern Rio Blanco County, forming the White. It flows west, then northwest, past Meeker (site of the White River Museum), and across the broad valley between the Danforth Hills on the north and the Roan Plateau on the south. Downstream from Meeker, it is joined by Piceance Creek and Yellow Creek. In western Rio Blanco County, it turns southwest, flows past Rangely, where it is joined by Douglas Creek, and into Uintah County, Utah, where it joins the Green 2 miles (3.2 km) south of Ouray.

The White River is navigable by small boats throughout most of its length. But in low water years the water level may be too low for navigation for a period of several months. Flows vary from 400 cu ft/s (11 m3/s) in late summers of dry years to well over 3,000 cu ft/s (85 m3/s) in spring.

According to the Köppen climate classification system, White River has a semi-arid climate, abbreviated "BSk" on climate maps.

All content from Kiddle encyclopedia articles (including the article images and facts) can be freely used under Attribution-ShareAlike license, unless stated otherwise. Cite this article:
White River (Green River tributary) Facts for Kids. Kiddle Encyclopedia.