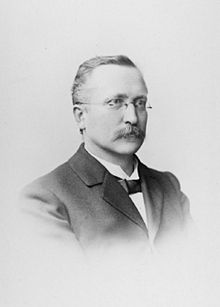 Wilhelm Roux (9 June 1850 in Jena – 15 September 1924 in Halle) was a German zoologist, anatomist and pioneer of experimental embryology.

For ten years he worked in Breslau (now Wroclaw), becoming director of his own Institute of Embryology in 1879. He was professor at Innsbruck, Austria from 1889–95, then accepted a professorial chair at the Anatomical Institute of the University of Halle, a post he retained until 1921.

Roux's research was based upon the notion of Entwicklungsmechanik or developmental mechanics. His methodology was to interfere with developing embryos and observe the outcome. Roux's investigations were performed mainly on frogs' eggs to research the earliest structures in amphibian development. His goal was to show Darwinian processes at work on the cellular level.

In 1888, Roux published the results of a series of defect experiments in which he took 2 and 4 cell frog embryos and killed half of the cells of each embryo with a hot needle. He reported that they grew into half-embryos and surmised that the separate function of the two cells had already been determined. This led him to propose his "mosaic" theory: after a few cell divisions the embryo would be like a mosaic, each cell playing its own unique part in the entire design.

After a few years Roux's theory was refuted by the studies of his colleague Hans Driesch and later, with more precision, Hans Spemann showed that, as a rule, Driesch's conclusions were correct, but that results like Roux's may be obtained after intervention in certain planes. Despite this early lapse Roux's pioneering mechanical methodology was to prove most fruitful in 20th century biology.

In a remarkable paper, Roux realised the significance of the linear structure of chromosomes. Their splitting into two equal longitudinal halves assured each daughter cell got the same chromosome complement. Therefore, chromosomes were the bearers of heredity. This was a significant event in cytogenetics.

All content from Kiddle encyclopedia articles (including the article images and facts) can be freely used under Attribution-ShareAlike license, unless stated otherwise. Cite this article:
Wilhelm Roux Facts for Kids. Kiddle Encyclopedia.