William Beaumont (November 21, 1785 – April 25, 1853) was a surgeon in the U.S. Army who became known as the "Father of Gastric Physiology" following his research on human digestion. 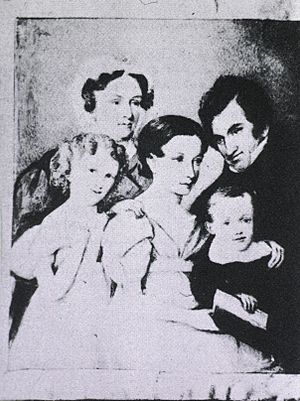 William Beaumont was born to Samuel Beaumont and Lucretia Abel in Lebanon, Connecticut; his father was a farmer. He left his home after he turned twenty-one, moved to Champlain, New York and obtained a teaching job. In 1810 he relocated to St. Albans, Vermont where he trained to become a physician through an apprenticeship with Dr. Truman Powell. In June 1812, the Third Medical Society of the State of Vermont in Burlington examined his knowledge "on the anatomy of the human body, and the theory and practice of physic and surgery" and recommended him as "judicious and safe practitioner in the different avocations of the medical profession."

From 1812 until 1815, Beaumont served as an assistant surgeon in the Army during the War of 1812 participating in the Battle of Plattsburgh. After the war ended, he started a private practice in Plattsburgh, New York, but by 1820 Beaumont had rejoined the Army as a surgeon. He was assigned a location at Fort Mackinac. Beaumont took a leave in 1821, and married Deborah "Debby" Green Platt in Plattsburgh, before returning to his post. Deborah was divorced from Nathaniel Platt, whose uncle Zephaniah Platt founded Plattsburgh after the beginning of the Revolutionary War. Her father, Israel Green, was a third cousin of General Nathanael Greene.

From Beaumont's Experiments and Observations on the Gastric Juice and the Physiology of Digestion, 1838 (p. 27)

On June 6, 1822, an employee of the American Fur Company on Mackinac Island, named Alexis St. Martin, was accidentally shot in the stomach by a discharge of a shotgun loaded with a buck shot from close range that injured his ribs and his stomach. Dr. Beaumont treated his wound, but expected St. Martin to die from his injuries. Despite this dire prediction, St. Martin survived – but with a hole, or fistula, in his stomach that never fully healed. Unable to continue work for the American Fur Company, he was hired as a handyman by Dr. Beaumont.[1]

By August 1825, Beaumont had been relocated to Fort Niagara in New York, and St. Martin had come with him. Beaumont recognized that he had in St. Martin an unusual opportunity to observe digestive processes. Beaumont began to perform experiments on digestion using the stomach of St. Martin. Most of the experiments were conducted by tying a piece of food to a string and inserting it through the hole into St. Martin's stomach. Every few hours, Beaumont would remove the food and observe how well it had been digested. Beaumont also extracted a sample of gastric acid from St. Martin's stomach for analysis. In September, St. Martin ran away from Dr. Beaumont and moved to Canada, leaving Beaumont to concentrate on his duties as an army surgeon but Dr. Beaumont had him caught to continue to exhibit him. Beaumont also used samples of stomach acid taken out of St. Martin to "digest" bits of food in cups. This led to the important discovery that the stomach acid, and not solely the mashing, pounding and squeezing of the stomach, digests the food into nutrients the stomach can use; in other words, digestion was primarily a chemical process and not a mechanical one.

During 1826 and 1827, Dr. Beaumont was stationed at Fort Howard in Green Bay, Wisconsin. In 1828 he was transferred to St. Louis, Missouri. While en route, St. Martin was ordered to stop at Fort Crawford in Prairie du Chien, Wisconsin, to serve as Dr. Beaumont's handyman again. In early 1831, Dr. Beaumont conducted another set of experiments on St. Martin's stomach, ranging from the simple observation of normal digestion to the effects that temperature, exercise and even emotions have on the digestive process.

Beaumont died in 1853 in St. Louis, Missouri as a result of slipping on ice-covered steps. He was buried at Bellefontaine Cemetery.

Several institutions are named for William Beaumont, including:

All content from Kiddle encyclopedia articles (including the article images and facts) can be freely used under Attribution-ShareAlike license, unless stated otherwise. Cite this article:
William Beaumont Facts for Kids. Kiddle Encyclopedia.