William Richard "Billy" Wilkerson (September 29, 1890 – September 2, 1962) was the founder of The Hollywood Reporter, a real estate developer in Las Vegas and owner of such nightclubs as Ciro's. His series of columns known as "Billy's List" helped to initiate the red scare that led to the Hollywood blacklist.

Wilkerson was born in Nashville, Tennessee, on September 29, 1890. He began to study medicine in Philadelphia, Pennsylvania, but when his father died leaving extensive gambling debts, Wilkerson quit school to support himself and his mother. He became a compulsive gambler himself, but quit when his son was born in October 1951.

Wilkerson was in relatively poor health throughout the latter half of the 1950s due to decades of excessive smoking. He continued to head The Hollywood Reporter and write his daily "Tradeviews" column until shortly before his death. Wilkerson died of a heart attack on September 2, 1962, at his Bel-Air home, one day before The Hollywood Reporter′s 32nd anniversary. He is interred at Holy Cross Cemetery in Culver City.

Wilkerson was married six times. His wives were:

When a friend won a Fort Lee, New Jersey movie theater in a bet, Wilkerson agreed to manage it in exchange for half the profits. Expanding his work in the movie industry, he became district manager at Universal Pictures under Carl Laemmle.

Wilkerson published the first issue of The Hollywood Reporter on September 3, 1930. He began each issue with a self-penned editorial entitled "Tradeviews", which proved highly influential.

In 1946, he began a series of columns in The Hollywood Reporter, listing suspected Communist sympathizers; "Billy's List" helped to initiate the "red scare" that led to the Hollywood blacklist. 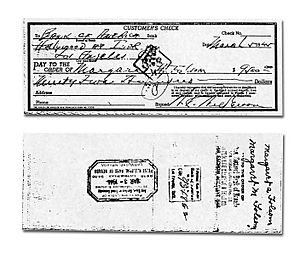 Wilkerson opened a series of social nightspots on Los Angeles' Sunset Strip. Seeing opportunities in Las Vegas, he made key investments there as well.

All content from Kiddle encyclopedia articles (including the article images and facts) can be freely used under Attribution-ShareAlike license, unless stated otherwise. Cite this article:
William R. Wilkerson Facts for Kids. Kiddle Encyclopedia.