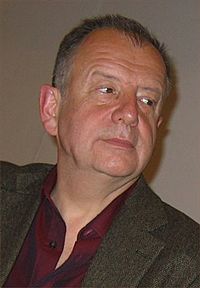 Karpiński made his writing debut in 1964 with an essay on François de La Rochefoucauld. He went on to publish in Kultura, Res Publica, Tygodnik Powszechny, Znak, Zeszyty Literackie and Gazeta Wyborcza.

Between 1982 and 2008 he worked as a researcher of the Centre National de la Recherche Scientifique in Paris. He has taught at the University of Texas in Austin (1990) and New York University (1994–95, invited by Tony Judt).

All content from Kiddle encyclopedia articles (including the article images and facts) can be freely used under Attribution-ShareAlike license, unless stated otherwise. Cite this article:
Wojciech Karpiński Facts for Kids. Kiddle Encyclopedia.