Woodridge is a village in Sullivan County, New York, United States. The population was 847 at the 2010 census. 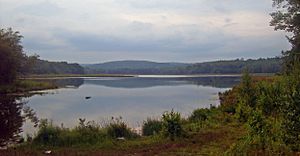 The village was formerly called "Centreville." A history of the village, Centreville to Woodridge by Erna W. Elliott, was published by Exposition Press in 1976. Centreville was a station stop along the old New York, Ontario and Western Railway

Woodridge is located in the Catskills Borscht Belt resort area. In its heyday it was home to numerous summer hotels, bungalow colonies, and boarding houses. Fallsburgh Central School's High School was in Woodridge. The last graduating class was in 1958. The new High School was built in Fallsburgh.

A small percentage of the permanent population is still Orthodox Jewish. There are two active synagogues in Woodridge as of today.

Silver Lake Dam was listed on the National Register of Historic Places in 2000.

There were 351 households out of which 33.3% had children under the age of 18 living with them, 41.0% were married couples living together, 16.2% had a female householder with no husband present, and 35.0% were non-families. 30.8% of all households were made up of individuals and 15.1% had someone living alone who was 65 years of age or older. The average household size was 2.50 and the average family size was 3.10.

All content from Kiddle encyclopedia articles (including the article images and facts) can be freely used under Attribution-ShareAlike license, unless stated otherwise. Cite this article:
Woodridge, New York Facts for Kids. Kiddle Encyclopedia.