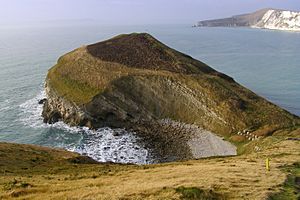 Worbarrow Tout is a promontory at the eastern end of Worbarrow Bay on Isle of Purbeck in Dorset on the south coast of England, about 6 kilometres (3.7 mi) south of Wareham and about 16 kilometres (10 mi) west of Swanage. Immediately to its east is Pondfield Cove.

Worbarrow Tout ("tout" means lookout) was originally part of Gad Cliff to its east, but sea erosion has virtually separated the two completely.

The Tout has a distinct pointed shape. It has steep angular layers of rock that visibly demonstrate the complex sedimentary folding that affected this area and that were caused by tectonic pressures as the African and European continents collided some 30 million years ago. The cliff sediments were then twisted horizontally and this is why the Chalks that are between 85 and 145 million years old are found at the rear of the bay. The sediments that face the sea at the front of the bay and form the peninsula Worbarrow Tout are the 150-million-year-old Portland limestones and 147-million-year-old Purbeck Beds.

The localities along the Jurassic Coast include a large range of important fossil zones. The Purbeck lagoonal limestones and the shales that are exposed in the cliffs of Worbarrow Tout contain dinosaur footprints and have abundant brackish water bivalves, gastropods and ostracods.

The rocky seabed is the most easterly location on the south coast for colonies of a rare and protected species of slow growing coral, called the Pink Seafan. This is one of only two species of fan-corals that is to be found in British waters.

All content from Kiddle encyclopedia articles (including the article images and facts) can be freely used under Attribution-ShareAlike license, unless stated otherwise. Cite this article:
Worbarrow Tout Facts for Kids. Kiddle Encyclopedia.