Wyalusing is a borough in Bradford County, Pennsylvania, United States. The population was 596 as of the 2010 census. 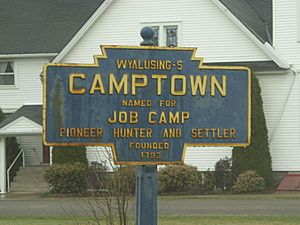 The history of Wyalusing dates back centuries. It was originally known as M'chwihilusing. The Moravian Christian Munsees for several years had a settlement Friedenshuetten ( Tents of Peace) in what is now Wyalusing. Before 1750 the settlement was known as Gahontoto and was home to the Tehotachsee tribe of Native Americans. This small tribe would eventually be completely wiped out by the Cayuga tribe. In 1792 the chief of the Cayugas and about 20 other families rebuilt the town.

In the 19th century the town began to prosper as it became a shipping area for logs and other items on the Susquehanna River. In 1820 the construction of the Welles Mill along Wyalusing Creek made Wyalusing a prime area for people to farm and raise crops. In 1887 Wyalusing became a borough. Many of the buildings constructed in the late 19th century and early 1920s are still part of Main Street today.

Wyalusing is home to one of the biggest beef processing plants on the east coast. Cargill regional beef Wyalusing is located just a couple miles outside of town. This plant was originally started in the late 1970s by the local Taylor family as a small meat processing plant. It eventually grew into a multimillion-dollar business that employs over 1,200 people from the surrounding area. Cargill is one of the biggest suppliers of ground beef to large grocery chains such as Wegmans, Giant, Shop Rite and more. In 2002 the Taylor family sold the business to the Cargill corporation, one of the largest privately owned companies in the United States.

The Wyalusing Path was a historic trace that ran from what is now Wyalusing to the Native American village of Canaserage (what is now Muncy, Pennsylvania, on the West Branch Susquehanna River).

There were 264 households, out of which 23.1% had children under the age of 18 living with them, 43.6% were married couples living together, 8.3% had a female householder with no husband present, and 44.7% were non-families. 39.8% of all households were made up of individuals, and 22.3% had someone living alone who was 65 years of age or older. The average household size was 2.05 and the average family size was 2.75. 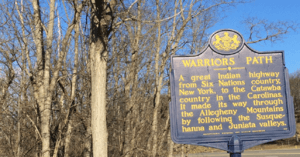 Scenic attractions include the Wyalusing Rocks and the Marie Antoinette Lookout.

All content from Kiddle encyclopedia articles (including the article images and facts) can be freely used under Attribution-ShareAlike license, unless stated otherwise. Cite this article:
Wyalusing, Pennsylvania Facts for Kids. Kiddle Encyclopedia.