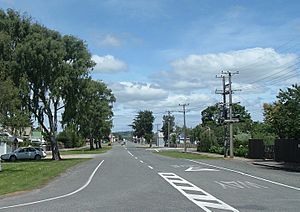 Wyndham is a rural town of 550 people in the South Island of New Zealand in the Southland region, 45 km (28 mi) east of Invercargill and 25 km (15 mi) south of Gore. The original Māori name of the locality was Mokoreta (clear or sweet water).

Wyndham was named by Sir John Richardson for General Sir Charles Ash Windham who fought in the Crimean War. The streets are in turn named for events, places, battles and personalities from that war. The town was initially surveyed in 1869 and gazetted a town district in 1882.

Wyndham is situated on the east banks of the Mataura River, between the Mimihau Stream to the north and the Wyndham (Mokoreta) River to the south. Protected now by a floodbank, Wyndham is a service centre for the surrounding districts with a shopping centre, library, museum and hotel. For eighty years, it was served by the Wyndham Branch railway which provided a connection with the Main South Line, and for forty years, an extension past Wyndham was operated to Glenham.

Wyndham originally had a dairy factory established in 1885 and a flax milling factory named The Field-Gibson Flax Milling Company established in 1903, but these have both long since closed.

All content from Kiddle encyclopedia articles (including the article images and facts) can be freely used under Attribution-ShareAlike license, unless stated otherwise. Cite this article:
Wyndham, New Zealand Facts for Kids. Kiddle Encyclopedia.