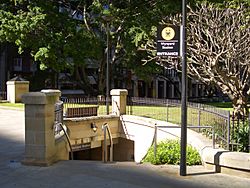 Wynyard is an urban locality around Wynyard railway station in Sydney, Australia. Wynyard is located in the Sydney central business district and is part of the local government area of the City of Sydney. The postcode is 2000.

Wynyard Park is a prominent landmark in this area.

Wynyard railway station is located underground and is a major Sydney Trains railway station, serviced by six lines. It is also a major bus terminal, serving as the CBD terminus for many routes from the Northern Beaches and North Shore.

All content from Kiddle encyclopedia articles (including the article images and facts) can be freely used under Attribution-ShareAlike license, unless stated otherwise. Cite this article:
Wynyard, Sydney Facts for Kids. Kiddle Encyclopedia.