What was the last known female Yangtze giant soft-shell turtle died in a Suzhou zoo in China in 2019. Another female was found in Vietnam in October 2020. Scientists tested her DNA and then put her back in the lake.

This leaves four turtles alive: One male turtle living in Suzhou Shangfangshan Forest Zoo, the female turtle in Dong Mo Lake in Vietnam, perhaps another one in Dong Mo Lake, and another one in Xuan Khanh Lake in Vietnam. Scientists don't know whether the Xuan Khanh lake turtle is male or female. Scientist Tim McCormack thinks the two lake turtles became trapped when people built dams on their rivers. Scientists say there might be more in other lakes and rivers. Some scientists have gone on boats to look for them.

This turtle is very big with a pointy noise that it can use to breathe while keeping most of its body hidden underwater. Scientists don't know much about the way it acts in the wild because there are so few left. It is the largest turtle that lives in fresh water instead of sea water. It has a long, flat body. It can weigh 150 to 220 kilograms (330 to 485 pounds).

The Yangtze giant soft-shell turtle used to live in the Red River in China and in many parts of Vietnam in the flood plain from the Yangtze River. It became endangered because humans built roads, buildings and dams where the turtle likes to live and because of pollution. It also became endangered because people would catch the turtle to eat it and its eggs and to sell turtles as pets. Illegal hunters also catch the turtle to sell its body parts as ingredients for traditional Chinese medicine. 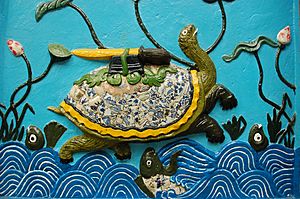 Kim Qui with the sword.

In 2007, scientists found a female Yangtze giant soft-shell turtle in a zoo in Changsha. The turtle had been there for more than fifty years, before Yangtze giant soft-shell turtles became rare. The people in the zoo knew she was a large, female turtle but not that she had become one of the rarest on Earth. The deputy director of the zoo was attending a conference about tigers and went to the speech about turtles for fun. He saw they were talking about the same kind of turtle as the one in his zoo.

The people in Changsha knew they had a large turtle in their zoo, but they didn't know it was a Yangtze giant soft-shell turtle. A circus performer had sold her to the zoo in the 1950s. They fed her raw meat, which kept her in good health, but it was not good for making eggs. She laid eggs every year, but they never hatched. This was because no male turtle had fertilized them, but also because she needed to eat foods with more calcium.

When people found out the Changsha turtle was a female Yangtze giant soft-shell turtle, they did not bring her to Suzhou right away. Both cities wanted the other turtle brought to them. Turtles are important symbols of living a long time in China, so the people of Changsha did not want to give her away. Eventually, the two zoos agreed the female should come to Changsha and that they would divide up and share the baby turtles. In 2008, the female was moved from the Changsha Zoo to Suzhou Shangfangshan Forest Zoo.

The first year, the female turtle laid many eggs, and about half of them were fertilized. None hatched. Some of the eggs had very thin shells. The zookeepers realized that there was not enough calcium in the food the turtle was eating, so they fed her different foods with more calcium. Then they realized that visitors to the zoo were throwing food and garbage into the turtle's lake even though there were big signs saying not to.

All content from Kiddle encyclopedia articles (including the article images and facts) can be freely used under Attribution-ShareAlike license, unless stated otherwise. Cite this article:
Yangtze giant soft-shell turtle Facts for Kids. Kiddle Encyclopedia.