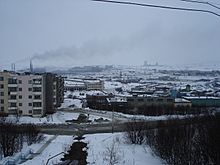 Zapolyarny (Russian: Заполя́рный) is a town in the Pechengsky District of northern Murmansk Oblast. It is about 103 kilometers (64 miles) away from the administrative centre of Murmansk. In 2010, the population was 15,825 people.

Zapolyarny is the closest settlement to the Koshka Yavr air base.

All content from Kiddle encyclopedia articles (including the article images and facts) can be freely used under Attribution-ShareAlike license, unless stated otherwise. Cite this article:
Zapolyarny, Murmansk Oblast Facts for Kids. Kiddle Encyclopedia.