The term zome is used in several related senses. A zome in the original sense is a building using unusual geometries (different from the standard house or other building which is essentially one or a series of rectangular boxes). The word "zome" was coined in 1968 by Steve Durkee, now known as Nooruddeen Durkee, combining the words dome and zonohedron. One of the earliest models ended up as a large climbing structure at the Lama Foundation. In the second sense as a learning tool or toy, "Zometool" refers to a model-construction toy manufactured by Zometool, Inc. It is sometimes thought of as the ultimate form of the "ball and stick" construction toy, in form. It appeals to adults as well as children, and is educational on many levels (not the least, geometry). Finally, the term "Zome system" refers to the mathematics underlying the physical construction system.

Both the building and the learning tool are the brainchildren of inventor/designer Steve Baer, his wife, Holly, and associates.

Following his education at Amherst College and UCLA, Steve Baer studied mathematics at Eidgenössische Technische Hochschule (Zurich, Switzerland). Here he became interested in the possibilities of building innovative structures using polyhedra. Baer and his wife, Holly, moved back to the U.S., settling in Albuquerque, New Mexico in the early 1960s. In New Mexico, he experimented with constructing buildings of unusual geometries (calling them by his friend Steve Durkee's term: "zomes" — see "Drop City") — buildings intended to be appropriate to their environment, notably to utilize solar energy well. Baer was fascinated with the dome geometry popularized by architect R. Buckminster Fuller. Baer was an occasional guest at Drop City, an arts and experimental community near Trinidad, CO. He wanted to design and construct buildings that didn't suffer from some of the limitations of the smaller, owner-built versions of geodesic domes (of the 'pure Fuller' design).

In recent years, the unconventional "zome" building-design approach with its multi-faceted geometric lines has been taken up by French builders in the Pyrenees. Home Work, a book published in 2004 and edited by Lloyd Kahn, has a section featuring these buildings. While many zomes built in the last couple decades have been wood-framed and made use of wood sheathing, much of what Baer himself originally designed and constructed involved metal framing with a sheet-metal outer skin.

Zomes have also been used in the artistic, sculptural, and furniture areas. Zomadic, based in San Francisco, CA and founded by Rob Bell, incorporates zome geometry into artistic structures constructed primarily from CNC machined plywood components. Bell is a frequent attendee at Burning Man, a yearly artistic showcase event located in the Black Rock Desert of Nevada.

Richie Duncan of Kodama Zomes, based in southern Oregon has invented a structural system based on a hanging zome geometry, suspended from an overhead anchor point. Constructed of metal compressive elements and webbing tensile elements, the structures are able to be assembled and disassembled. This suspended zome system has been used in furniture, performing arts, and treehouse applications.

Yann Lipnick of Zomadic Concepts in France has an extensive study of, and multiple project construction of zomes in many different materials. He highlights the universal appeal and healing atmosphere that zomes provide, and has training classes and reference books on zome construction. 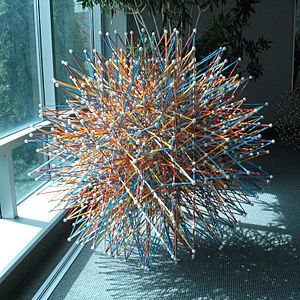 The Zometool plastic construction set is produced by a privately owned company of the same name, based outside of Boulder, Colorado, and which evolved out of Baer's company ZomeWorks. It is perhaps best described as a "space-frame construction set". Its elements consist of small connector nodes and struts of various colors. The overall shape of a connector node is that of a non-uniform small rhombicosidodecahedron, except that each face is replaced by a small hole. The ends of the struts are designed to fit in the holes of the connector nodes, allowing for syntheses of a variety of structures. The idea of shape-coding the three types of struts was developed by Marc Pelletier and Paul Hildebrandt. To create the "balls," or nodes, Pelletier and Hildebrandt invented a system of 62 hydraulic pins that came together to form a mold. The first connector node emerged from their mold perfectly on April 1, 1992. These parts are made from state-of-the-art ABS plastic injection-mold technology.

In the years since 1992, Zometool has widened and enriched its line of products. Much of the development has focused on improving the style or the variety of struts available. Since 1992, the basic design of the connector node has not changed, and hence the various parts released have remained universally compatible. From 1992 until 2000, Zometool produced many kits which included connector nodes and blue, yellow, and red struts. In 2000, Zometool introduced green lines created in France by the architect Fabien Vienne, which were designed to allow the user to build, among other things, models of the regular tetrahedron and octahedron. In 2003, Zometool changed the style of the struts slightly. The struts "with clicks" have a different surface texture and they also have longer nibs which allow for a more robust connection between connector node and strut.

At their midpoints, each of the yellow and red struts has an apparent twist. At these points, the cross-sectional shape reverses. This design feature forces the connector nodes on the ends of the strut to have the same orientation. Similarly, the cross section of the blue strut is a non-square rectangle, again ensuring that the two nodes on the ends have the same orientation. Instead of a twist, the green struts have two bends which allow them to fit into the pentagonal holes of the connector node.

Among other places, the word Zome comes from the term zone. The Zome system allows no more than 61 zones. The cross-sectional shapes correspond to colors, and in turn these correspond to zone colors. Hence the Zome system has 15 blue zones, 10 yellow zones, 6 red zones, and 30 green zones. Two shapes are associated with blue. The blue struts with a rectangular cross section are designed to lie in the same zones as the blue struts, but they are half the length of a blue strut; hence these struts are often called "half-blue" (and were originally made in a light blue color). The blue-green struts with a rhombic cross section lie in the same zones as the green struts, but they are designed so that the ratio of a rhombic blue-green strut to a blue strut is 1:1 (as opposed to the green strut's √2:1). It is important to understand that, due to this length ratio, the blue-green struts having a rhombic cross section do not mathematically belong to the Zome system.

A definition of the Zome system

Here is a mathematical definition of the Zome system, on which the physical Zometool construction set is based. It is defined in terms of the vector space

denote the Golden ratio and let

denote the symmetry group of the configuration of vectors

, an example of a Coxeter group, is known as the icosahedral group because it is the symmetry group of a regular icosahedron having these vectors as its vertices. The subgroup of

consisting of the elements with determinant 1 (i.e. the rotations) is isomorphic to

Define the "standard blue vectors" as the

. Define the "standard yellow vectors" as the

. Define the "standard red vectors" as the

. A "strut" of the Zome System is any vector which can be obtained from the standard vectors described above by scaling by any power

is an integer. A "node" of the Zome System is any element of the subgroup of

generated by the struts. Finally, the "Zome system" is the set of all pairs

is a set of nodes and

is a set of pairs

. and a "green strut" as any vector which can be obtained by scaling a standard green vector by any integral power

. As above, one may check that there are

=60 standard green vectors. One may then enhance the Zome system by including these green struts. Doing this does not affect the set of nodes.

The abstract Zome system defined above is significant because of the following fact: Every connected Zome model has a faithful image in the Zome system. The converse of this fact is only partially true, but this is due only to the laws of physics. For example, the radius of a Zometool node is positive (as opposed to a node being a single point mathematically), so one cannot make a Zometool model where two nodes are separated by an arbitrarily small prescribed distance. Similarly, only a finite number of lengths of struts will ever be manufactured, and a green strut cannot be placed directly adjacent to a red strut or another green strut with which it shares the same hole (even though they are mathematically distinct).

Zome as a modeling system 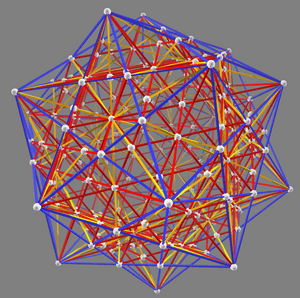 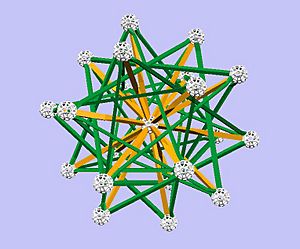 The Zome system is especially good at modeling 1-dimensional skeleta of highly symmetric objects in 3- and 4-dimensional Euclidean space. The most prominent among these are the five Platonic solids, and the 4-dimensional polytopes related to the 120-cell and the 600-cell. However, the list of mathematical objects which are amenable to Zome is long, and an exhaustive list is not forthcoming. Besides those already mentioned, one may use Zome to model the following mathematical objects:

Other uses of Zome

The uses of Zome are not restricted to pure mathematics. Other uses include the study of engineering problems, especially steel-truss structures, the study of some molecular, nanotube, and viral structures, and to make soap film surfaces.

All content from Kiddle encyclopedia articles (including the article images and facts) can be freely used under Attribution-ShareAlike license, unless stated otherwise. Cite this article:
Zome Facts for Kids. Kiddle Encyclopedia.