Zoombinis is a series of educational puzzle computer games that were originally developed by TERC and published by Broderbund until The Learning Company (formerly SoftKey) bought Broderbund in 1998 and took over developing and publishing the series in 2001. The series consists of three games: Logical Journey of the Zoombinis (1996), Zoombinis: Mountain Rescue (2001), and Zoombinis: Island Odyssey (2002). On August 6, 2015, Logical Journey was updated and re-released (as Zoombinis) for tablets and modern operating systems by TERC, FableVision, and Learning Games Network. The series focuses on the Zoombinis, small blue creatures each with different appearances and personalities, which the player must guide through strange puzzle-filled lands.

Logical Journey of the Zoombinis (1996) 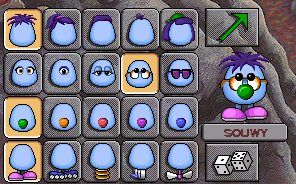 Zoombini Isle, the Zoombinis' homeland, has been taken over by the evil Bloats. The Zoombinis flee but end up in a mysterious and treacherous land. Players must guide the Zoombinis through this land to reach the safety of Zoombiniville, a land of hope and prosperity for the Zoombinis. The game was made in 1995, and released in 1996.

The player starts at Zoombini Isle, where they assemble a team of 16 Zoombinis, picking from 5 different options each in hair, eyes, nose color, and footwear, for a total of 625 possible combinations. Each combination can be used twice in the game. The player then has to do a series of minigames, helping the Zoombinis traverse through dangerous places until they reach the next location on the island. By the end of a minigame, a number of Zoombinis may be left behind. At the end of a section, the Zoombinis can rest at a campsite and be stored to join another group of Zoombinis if there are fewer than 16 Zoombinis left. From the first campsite are two branching roads that take the Zoombinis to two different areas of the island and eventually join up at the second campsite before traversing to the final section of the island. At the end of the final section lies the target destination Zoombiniville. For each group of Zoombinis that make it through a section with all 16 in their group a monument is added to Zoombiniville. The game is won when 625 Zoombinis make it to Zoombiniville.

After the foundation of Zoombiniville, the Zoombinis find peace once more, until a small group of them get trapped inside a cave seeking shelter from a storm. They meet up with strange creatures called Boolies who occupy a city known as Booliewood. As a result of the storm, the Boolies have been scattered across the land, and their mayor, the Grand Boolie Boolie, has disappeared. The goal of the game is to rescue a total of 400 Boolies and bring them to Booliewood to return the Grand Boolie Boolie.

The player begins in Zoombiniville, where they assemble a team of 16 Zoombinis. Like the previous game, the player has to get as many of the 16 Zoombinis through the minigames as possible, by making use of the Zoombinis' different characteristics in accordance to the patterns and principles of the minigames. Some of the minigames however require only the player's logic, regardless of the Zoombinis' characteristics. After all minigames are completed on a part of the land, the player progresses to play more minigames on the next part of the land. The gameplay takes more of an adventure game approach, as the number of Zoombinis on a part of the journey differ throughout different parts of the game after each checkpoint between Zoombiniville and Booliewood. The checkpoints are where Zoombinis that do not make it through minigames return to. The player also has the option to send the Zoombinis on different routes from checkpoints across the land to complete different minigames.

Long after the take over of Zoombini Isle at the hands of the Bloats, the island was completely stripped of its food and plant life, leaving the Zerbles and native moths hungry and forcing the Bloats to evacuate. A seagull informs the Zoombinis, who live in Zoombiniville. After an expedition of Zoombinis survey the damage on the island, they decide to bring caterpillars to restore balance to the island's chain of life.

The player begins by creating a group of 12 Zoombinis, which can be customized. The player must then complete different puzzles, such as growing berries and breeding moths, to eventually restore the ecosystem of the island. This game incorporates science concepts as well as math concepts into the puzzles, including intersection of rates, cryptography, astronomical time, Venn diagrams, and Punnett squares, as well as some reincarnations of puzzles from Logical Journey. The graphics have again received an update. The Zoombinis are fully 3-D, but their features no longer affect gameplay. When the Zoombinis release 224 Zerbles into the wild, the game is won.

As a computer game, Zoombinis is an entertaining activity for students from elementary to middle school. However, as an educational tool, Zoombinis stands above many other mathematical, analytical, and logical educational methods. The game works with problem solving through mathematics, deduction, and hypothesis testing primarily by clearly stating the goal of the problem at hand, with the option to either deduce for one's self or learn from with gameplay strategies for success.

Sub-games such as "Allergic Cliffs" and "Stone Cold Caves" require the player to find patterns and arrangements of the Zoombinis in order to pass the obstacle. Each game also has a select number of attempts which may be failures before a Zoombini is taken back to the beginning of a path segment (to Zoombini Isle, or to the base camps of Shelter Rock and Shade Tree), giving an incentive for the player to think critically and not randomly guess answers. As a result, these games enable players' deductive skills while also enforcing strategic efficiency.

Players also encounter critical thinking with testing and observing different logical outcomes in "Pizza Pass" and "Mudball Wall". By examining the varying characteristics of toppings on a pizza and the number and color of dots on a wall, the player can experiment with the correct patterns to get the Zoombinis to the next level. Similarly, with the deductive reasoning sub-games, these exercises discourage random guessing by giving only a few options to fail before losing a Zoombini. However, with the games that involve more hypothesis testing, the incorrect guesses remain on the screen in a categorized pile so that the player might learn from previous attempts to come to the correct conclusion.

With the game's release in the Spring of 1996, through its continued use in the present, observations of the game have shown it to be efficient and useful for students and teachers alike. As a learning tool, the game is fun and interactive for children born into the continuously evolving technological era of 2016. The characters are generalized, but still have a cartoonish look to entice any young person who wants to learn, and the format of the game inspires group work. The communication created between two or more players talking about how to find the right kind of pizza or nose, eyes, and hair matching Zoombini is a simple and effective way that students have fun learning with the game.

All content from Kiddle encyclopedia articles (including the article images and facts) can be freely used under Attribution-ShareAlike license, unless stated otherwise. Cite this article:
Zoombinis Facts for Kids. Kiddle Encyclopedia.