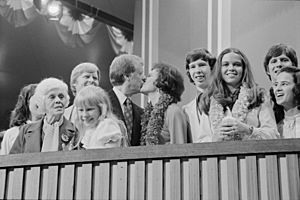 Carter kisses his wife Rosalynn on the final day of the convention, with members of their family surrounding them 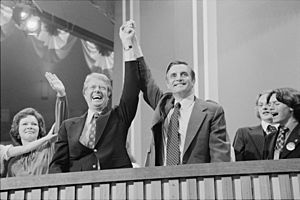 The convention was the first in New York City since the 103-ballot 1924 convention.

All content from Kiddle encyclopedia articles (including the article images and facts) can be freely used under Attribution-ShareAlike license, unless stated otherwise. Cite this article:
1976 Democratic National Convention Facts for Kids. Kiddle Encyclopedia.