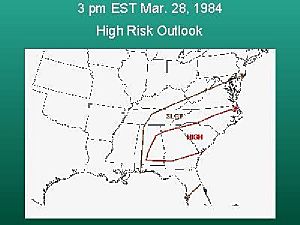 The outbreak killed 57 people (42 in North Carolina, 15 in South Carolina) and injured 1,249 others, and tornado damage in 2 counties in Georgia, 8 in South Carolina, and 17 in North Carolina. The day before, weak tornadoes were reported in locations from Louisiana to Alabama and thunderstorms also triggered floods in Florida that caused a train derailment. Severe thunderstorms also caused four additional deaths in Maryland and Pennsylvania before dropping snow across the northeast. Cities including Atlanta, Charlotte, Columbia, Greenville, Fayetteville, Norfolk, Raleigh, and Suffolk had wind damage and it was reported as north as Delaware.

All content from Kiddle encyclopedia articles (including the article images and facts) can be freely used under Attribution-ShareAlike license, unless stated otherwise. Cite this article:
1984 Carolinas tornado outbreak Facts for Kids. Kiddle Encyclopedia.