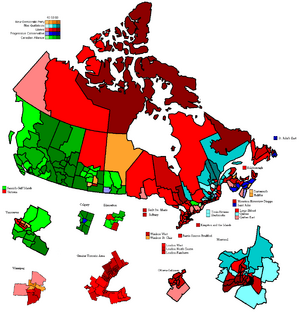 Map of Canada, showing the results of the 2000 election by riding.

The 2000 Canadian federal election was held on November 27, 2000, to elect 301 Members of Parliament of the House of Commons of Canada of the 37th Parliament of Canada.

* - Party did not nominate candidates in the previous election

1 - percentage change from Reform Party of Canada in previous election.

All content from Kiddle encyclopedia articles (including the article images and facts) can be freely used under Attribution-ShareAlike license, unless stated otherwise. Cite this article:
2000 Canadian federal election Facts for Kids. Kiddle Encyclopedia.