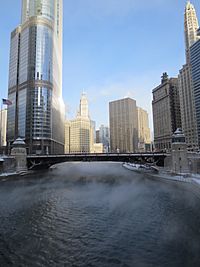 The Chicago River during the polar vortex

The 2014 North American polar vortex was a weather system that caused extremely cold weather through Canada and the United States. Freezing temperatures went all the way down to Nashville, Tennessee. Several cities broke records: Chicago O'Hare International Airport set a record on 6 January with a temperature of −15 °F (−26 °C), beating the −14 °F (−26 °C) record in 1884 and 1988. There were also power failures throughout Canada and United States. One in Newfoundland on 5 January took out the power of 190,000 customers. Almost 24,000 people lost electricity across Missouri, Illinois and Indiana.

In Minnesota, Governor Mark Dayton ordered all schools closed down due to weather. Across Indiana, over fifty of the state's ninety-two counties ordered roads closed to all traffic except emergency vehicles, mostly north of Indianapolis.

Several people were killed because of the extreme weather all across North America.

All content from Kiddle encyclopedia articles (including the article images and facts) can be freely used under Attribution-ShareAlike license, unless stated otherwise. Cite this article:
2014 North American polar vortex Facts for Kids. Kiddle Encyclopedia.