The 2016 Te Araroa earthquake was an earthquake measuring 7.1 on the moment magnitude scale that occurred at 04:37:55 NZST on 2 September 2016 (16:37:55 UTC 1 September). The epicentre was located 125 km (78 mi) north-east of Te Araroa off the East Cape of the North Island of New Zealand with a focal depth of 22 km (14 mi). The earthquake was widely felt throughout the North Island and in the upper South Island. There were no reported casualties, and buildings predominantly suffered only a little bit of damage. 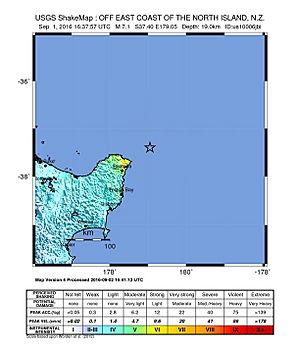 Following the earthquake, the Ministry of Civil Defence & Emergency Management (MCDEM) issued a tsunami warning for parts of the north and east coasts of the North Island. Waves measuring 30 cm in height were recorded by tide gauges at East Cape and Great Barrier Island, and although the warning was later cancelled advisories remained in place for strong currents and abnormal sea level fluctuations.

Power outages temporarily affected 300 homes near Rototahi and Waimata north of Gisborne while KiwiRail issued a precautionary shutdown notice for part of the rail network in Auckland.

While no injuries or significant damage occurred, a spokesperson for the Earthquake Commission said they had received 48 claims for damage compensation by 4:30 pm local time on the day of the earthquake. Damage was localised to coastal towns near the epicentre of the earthquake, including in Te Puia Springs where Puketiti Homestead and Stable, a Category 1 historic building, suffered damage to a chimney and fireplace.

All content from Kiddle encyclopedia articles (including the article images and facts) can be freely used under Attribution-ShareAlike license, unless stated otherwise. Cite this article:
2016 Te Araroa earthquake Facts for Kids. Kiddle Encyclopedia.