The 2018 Atlantic hurricane season was a near-normal season but above-average in terms of ACE and it had 15 named storms, 8 hurricanes, and 2 major hurricanes in which tropical cyclones were formed in the Northern Hemisphere at the Atlantic basin. It happens yearly, and the hurricane season officially started on June 1, and officially ended on November 30. 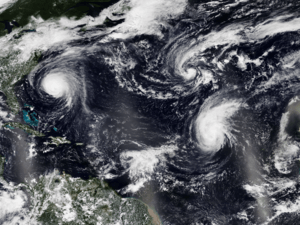 The following list of names will be used for naming storms that will be formed in the North Atlantic in 2018. Any retired names will be announced by the World Meteorological Organization (WMO) in the spring of 2019. The names not retired from this list will be used again in the 2024 season. This is the same list used in the 2012 season, with the exception of the name Sara which replaced Sandy.

The storm names Florence and Michael were retired by the World Meteorological Organization on March 20, 2019, and they will not be used again for another Atlantic hurricane. They will be replaced with Francine and Milton for the 2024 season, respectively.

All content from Kiddle encyclopedia articles (including the article images and facts) can be freely used under Attribution-ShareAlike license, unless stated otherwise. Cite this article:
2018 Atlantic hurricane season Facts for Kids. Kiddle Encyclopedia.