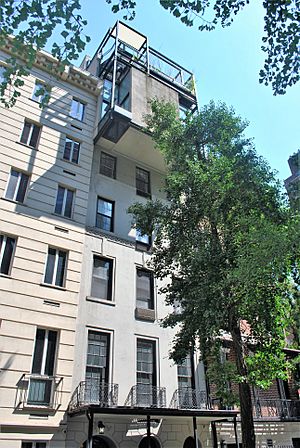 23 Beekman Place is the address of an apartment building located between East 50th and 51st Streets in the Turtle Bay neighborhood at the far east side of Midtown Manhattan, New York City. The building was re-designed by Paul Rudolph, an American architect and one-time dean of Yale University. It is one of the last of his projects still standing in the city.

The architectural features of its four-level penthouse include a slender steel skeletal structure and a stepped succession of concrete panels, cantilevering over an existing older brownstone, large walls of glass with panoramic East River views, high ceilings, and open floor plans. The facades date to different time periods, but the cement on both of the facades is intended to coordinate upper and lower halves of the building.

Rudolph was commissioned for the project, which later became his personal residency, and continued to work on the building until his death. Rudolph received negative feedback from residents of 23 Beekman Place—mainly from neighboring buildings, who did not want attention drawn to the area—which did not deter him from designing and building the addition, completed in 1982. Following the death of Rudolph and sale of the building by his estate, the building was altered to reconfigure the layout. The property was sold again and alterations continued that, again, were controversial, this time, because the architects changed some of the materials and the essential and unique traits of the home. In 2010, the building was designated as a New York City Landmark.

23 Beekman Place references a property that is located between 50th and 51st Streets on the east side of the street. The building on the property is approximately twenty feet wide and is sectioned into two distinct parts: the original five-story masonry structure and the addition of a four-story penthouse cantilevering over the front and back of the building. The two sections are very distinct from one another; the image is of a modern black hat paired with a traditional white suit. The styles of construction are different and invoke extremes, a white and black building separated at the waist.

Paul Marvin Rudolph began his relationship with the property at 23 Beekman Place in 1961, when he leased the fourth-floor apartment. In 1965, he claimed the apartment as his permanent residence. In October 1976, Rudolph bought the building at 23 Beekman Place for $300,000 and began converting it from four to five apartments, by adding the modernist multi-dimensional penthouse.

Paul Rudolph completed only six buildings in New York City, although he also worked on the Erwin P. Staller Residence, located in Lloyd Harbor, New York, in 1973. His later work was based in Southeast Asia; it is said that the addition at 23 Beekman Place reflects aspects of that work. Rudolph’s style was considered within the “‘second generation’” modernists. He trained at Harvard University in the 1940s, studying under Walter Gropius, a (Bauhaus founder), but became unsatisfied by International Style, as he thought it was “‘monotonous’ and ‘timid’.” Rudolph respected pre-existing styles, including the structure of the existing brownstone at 23 Beekman Place, and saw it as a structure “meant to be built off,” which is exactly what he did. The addition to the building at 23 Beekman Place was one of Rudolph's most famous works, drawing on concepts from projects he designed during his career.

Rudolph experimented with industrial materials; concrete was one that proved most essential, even where some of his greatest work did not use it as a primary material. The penthouse was made of steel, which he would paint brown, when exposed, to “contrast with the color of the concrete panels." Rudolph saw his penthouse as a secret observation deck to which he could escape; “it served as his private laboratory in which the layered interior organization is expressed on the exterior through the play of open and closed forms that project out, rise up, and recede from the street.” He played with the way a building looked on the inside, as well as on the outside, considering different perspectives that could be enjoyed.

The first architectural change to the original building at 23 Beekman Place was done by architect Franklin Abbott, who remodeled the front elevation and the interiors in 1929, adding Neo-classical details and round-arched windows to its façade. The service entrance most likely was added at this time, including a metal canopy to deter water collection. The basement also was extended at the back of the property and the garden was surrounded by walls.

After purchasing 23 Beekman Place, Rudolph filed plans for a $120,000 alteration, which the Department of Buildings (DOB) rejected in July 1976. There were problems with the proposed height and the expansion of the second through fourth floors of 23 Beekman Place; square footage would increase almost 25% and went beyond what was allowed by zoning legislation. In February 1977, the proposal was presented to the New York City Board of Standards and Appeals (BSA), which had authority to override legislative limits. Following the hearing, Alfonso Duarte approved the plans and the Department of Buildings granted a permit, in June 1977. Donald Luckenbill, a Pratt Institute-trained architect, was managing architect from 1969 to 1982. Luckenbill developed the project from 1976 to 1977; Marco Martelli was the General Contractor and Vincent J. DeSimone was the structural engineer.

The back of the building was demolished and a new façade, made of steel and glass, was installed. The addition of the rooftop was designed to support a number of terraces and appendages; a projecting beam originally was to cantilever nearly five feet over the sidewalk and Rudolph proposed a rooftop swimming pool, but the DOB and BSA rejected those ideas. The first orders of construction were to reconstruct standing brick walls that had been deemed unsafe. After that, Rudolph’s famous penthouse was constructed, beginning in 1977-78, out of very light steel and concrete block panels. Almost all of the interior work for the rentable apartments was finished by the end of 1978, and all the necessary materials for the penthouse were lifted to the fifth floor. A new certificate of occupancy was issued in January 1992.

On November 16, 2010, the New York City Landmarks Preservation Commission voted to designate the building at 23 Beekman Place as a Historic Landmark. Commission Chairman Robert B. Tierney said that “the landmarks that were designated today are a mosaic of architectural styles that span 150 years of New York City history, culture, and growth" and that the “buildings speak volumes about our shared heritage, and help define who we are now." 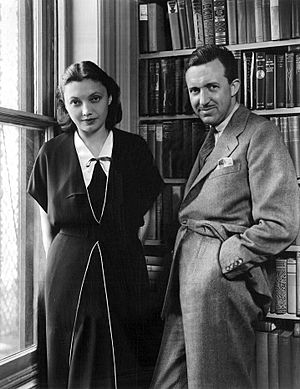 The land at 23 Beekman Place once was part of the country estate of James Beekman, a descendant of Dutch colonist Willem Beekman. The building originates from the 1860s and was owned by number of parties, including Beekman.

Maria L. Higgins owned the town house in 1906, before it was separated into apartments, and sold it to Charles Schmid. One of these owners eliminated the stoop from the original structure and divided the townhouse into two apartments; Schmid and his family, and Roger Howson – later to be chief librarian at Columbia University – and his family, lived in the building in the 1910s. From 1922 until the 1950s, actress Katharine Cornell and her director-producer husband Guthrie McClintic lived at 23 Beekman Place, presumably having acquired it from Schmid. Prior to 1960, the building was converted to a Class A multiple dwelling; in 1960, it had four units, two on the first floor and one on each of three floors above.

Rudolph was commissioned for the project in 1967 and purchased the property in 1976; he owned or controlled ownership of the property until his death in 1997. The property was sold by his estate to Gabrielle and Michael Boyd in 2000. The Boyds had the building layout reconfigured in 2001 to provide two duplexes on the bottom floors, including the basement, still totaling four units. They sold the property to Rupert LLC in 2003, and, by 2004, architects Andrew Bernheimer and Jared Della Valle were commissioned to renovate the penthouse apartment in what they believed would be a style similar to what Rudolph would have wanted. Della Valle and Bernheimer received awards for their work on the apartment and referred to the apartment as a “laboratory for its designer” in New York magazine in 2006. The renovations to the interior were controversial because some thought it should not have been altered. Some of the renovations, however, were practical, such as the air-conditioning and the sprinkler system.

The original building is made up of the ground floor (also known as a basement, with a cellar below), first, second, third, and fourth stories, having a number of structural variances in style and material. The fifth story is where the penthouse begins and continues upwards for four more levels, as the building ascends from one time period and abruptly switches to the next. The primary materials used are painted brown steel, metal beams, concrete panels, acrylic, and mylan. When renovating the apartment building, contractors found a piece of sheetrock, with the words, “MELAMINE EVERYTHING,” referring to the material used in the kitchen and likely dating to the original construction in the 1970s. The penthouse, “sometimes described as a quadriplex” is organized in four, linked levels. The center of the Apartment is defined by “cantilevered floors, narrow bridges, open stairs, windows of varying dimensions, and terraces” amounting to an estimation of seventeen separate levels.

William Grindereng, once a tenant there, describes Rudolph's residence as follows:

...his apartment at Beekman Place in New York underwent a number of reincarnations. One of them, I think it was the second one to the last, featured a bird walk, like [Frank Lloyd] Wright’s at Taliesin. It was a very narrow little gangway that went out to a little seating area, with seats on two sides. It was supported on some very, very tall steel columns underneath this little seating area. The ground sloped away, precipitously, to Roosevelt Boulevard and the East River. The frightening thing about it was this thing was constructed all of metal grating. When you went out there, you could look down and see through. It was very unsubstantial. Rudolph loaned me that apartment once, when he was out of town and I was doing something in New York. I stayed there. I went out on this bird walk to the little seating area, and it was really scary. I mentioned this to Rudolph when he came back. He said, 'Yes, I’m afraid to go out there myself.'

The lucite bathtub hanging above the kitchen is a very popular aspect of 23 Beekman Place, as the base of the tub is translucent, a very provocative aspect for a New York City home. The stairs have no railings and used to scare Rudolph’s cleaning lady. Following their purchase of the property, the Boyds added white-frosted-acrylic railings to the stairs and sheetrock to cover the skylight of a bathtub over the kitchen.

All content from Kiddle encyclopedia articles (including the article images and facts) can be freely used under Attribution-ShareAlike license, unless stated otherwise. Cite this article:
23 Beekman Place Facts for Kids. Kiddle Encyclopedia.