Kids Encyclopedia Facts
This page is about the arithmetical card game. For the game based on FOX's television series, see 24: The Game.
"Suntex" redirects here. For the unincorporated community, see Suntex, Oregon.

The 24 Game is an arithmetical card game in which the objective is to find a way to manipulate four integers so that the end result is 24. For example, for the card with the numbers 4, 7, 8, 8, a possible solution is

The game has been played in Shanghai since the 1960s, using playing cards. It has been known by other names, including Maths24, but these products are not associated with the copyrighted versions of the 24® Game.

The original version of 24 is played with an ordinary deck of playing cards with all the face cards removed. The aces are taken to have the value 1 and the basic game proceeds by having 4 cards dealt and the first player that can achieve the number 24 exactly using only allowed operations (addition, subtraction, multiplication, division, and parentheses) wins the hand. Some advanced players allow exponentiation, roots, logarithms, and other operations.

For short games of 24, once a hand is won, the cards go to the player that won. If everyone gives up, the cards are shuffled back into the deck. The game ends when the deck is exhausted, and the player with the most cards wins.

Longer games of 24 proceed by first dealing the cards out to the players, each of whom contributes to each set of cards exposed. A player who solves a set takes its cards and replenishes their pile, after the fashion of War. Players are eliminated when they no longer have any cards.

A slightly different version includes the face cards, Jack, Queen, and King, giving them the values 11, 12, and 13, respectively. 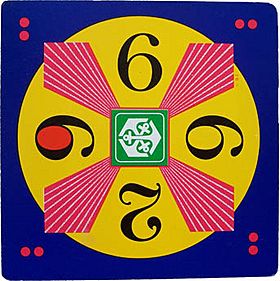 A typical, basic 24® Game Single Digits card. The two red dots in the corners refer to a second-degree level of difficulty. The number 9 is filled with red to differentiate it from a 6.

24® Game is a competitive, arithmetical card game aimed predominantly at primary and high school pupils. Although it can be played informally, the game was organised and operated within Southern Africa in a series of interschool, geographically increasing tournaments. The game experienced its peak during the 1990s, and is now no longer produced or played in any official manner.

The modern version of the 24® Game was invented and copyrighted by engineer and inventor Robert Sun in 1988. The first edition of the game, Single Digits, began appearing in schools in 1989. The 24® game is copyrighted, and is produced by Pennsylvania-based Suntex International Inc.

Eight other editions of the game would follow. The project aimed to introduce pupils and encourage their participation in mathematics via entertaining activities including the 24® Game as a mathematics teaching tool.

The cards are double-sided, thin cardboard squares with sides measuring approximately 10 cm. The conventional cards bear the Old Mutual logo in the centres of each side, however with the green and white inverted on one side to differentiate. Later variations of the cards bore red, blue and black logos.

The conventional card displays four numbers, each a single digit from 1 to 9. Numbers may repeat. The cards are designed to be viewed from any angle.

The card difficulty is ranked by displaying one, two or three dots in each corner of the card in white, red and yellow respectively, as the difficulty increases.

Although official rules were later published, the game evolved with common basic rules, and many smaller variations.

Any number of competitors (usually four at most) sit around a table. The cards are placed, one at a time, in the centre of the table. The first person to cover the card with their hand and claim to have the solution would then be given the first opportunity to give their answer.

The 24® Game game was intended and mostly played in tournament scenarios, ranging from school to international levels.

Competitors are initially distributed into tables of four, each with their own adjudicator. The game is played in rounds, with participants competing for points. Points are earned by solving cards, with one, two or three points assigned to cards of increasing difficulty. After claiming a solution to a card, if a participant failed to give a correct or legal solution their points would be deducted according to the difficulty. Rounds continue for a predefined length of time, at the end of which the points are tallied and the winners proceed.

At the top competition levels, there would typically be almost no delay between a card's placement and a participant's claiming it. Because there are only a finite number of cards that can be made, participants can give solutions from memory. Also, participants could exploit the small delay between claiming a card and giving its solution, to work out the solution.

Because of the finite extent of the basic cards, many variations and adaptations of the game were introduced to add complexity to tournaments.

Instead of many participants competing to solve communal cards for a set time, each participant could be presented with an entire pack of cards. The times taken to work through the pack, solving all cards, would be recorded and compared.

Early versions go the boxed games contained a cardboard sleeve that could hold two cards side-by-side could be used in the game. The sleeve allows three numbers from each card to be visible, while concealing the fourth number from each. Participants would be required to solve a sleeve by identifying a number that could be common to both cards, as well as giving both card solutions. These "Puzzle Sleeves" are no longer produced, but an edition titled "Variables" has been created to allow the same style of play.

New cards were later introduced to the games. The first card adaptation was the introduction of fractions. 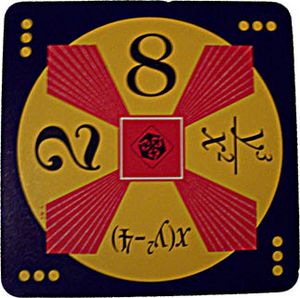 A Maths24 card with the inclusion of variables, being used in an algebraic expression, in fractional form and with powers

Finally, cards were printed with x and y variables that could appear in many forms, including fractions, powers and algebraic expressions. Participants would be required to find positive integers less than ten that the variables could represent, as well as the solution.

Mental arithmetic and fast thinking are necessary skills for competitive play. Pencil and paper will slow down a player, and are not allowed during tournament play.

In the original version of the game played with a standard 52-card deck, there are

Additional operations, such as square root and factorial, allow more possible solutions to the game. For instance, a set of 1,1,1,1 would be impossible to solve with only the five basic operations. However, with the use of factorials, it is possible to get 24 as

All content from Kiddle encyclopedia articles (including the article images and facts) can be freely used under Attribution-ShareAlike license, unless stated otherwise. Cite this article:
24 Game Facts for Kids. Kiddle Encyclopedia.