A. H. Stephens State Park, also known as A. H. Stevens Historic Park, is a 1,177 acres (476 ha) Georgia state park located in Crawfordville. The park is named for Alexander Hamilton Stephens, the Vice President of the Confederate States of America, and a former Georgia governor. The park contains Stephens' home, Liberty Hall, which has been fully restored to its original 1875 style. The park's museum houses one of Georgia's largest collections of Civil War artifacts. The park also offers several mill ponds for fishing and nature trails. 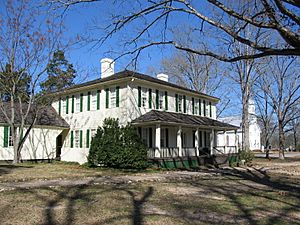 The Liberty Hall, also known as Bachelor's Hall, built in 1834, is one of the structures on the site, and is separately listed on the NRHP. It is currently a National Historic Landmark maintained by the Georgia Department of Natural Resources. A.H. Stephens bought the estate in 1845, and lived in this house until 1875, when he tore down the main structure to construct Liberty Hall. The two-story "big house" is a traditional 4 × 4 with four rooms on each level.

Many of Stephens' books are housed in a smaller structure behind the facility, where he spent much of his time after the war. After Stephens's death in 1883, Liberty Hall, owned by his surviving relatives, served as a boardinghouse until 1932, when it was donated to the state of Georgia. The vice president's grave is on the front lawn, beneath a marble statue in his honor.

All content from Kiddle encyclopedia articles (including the article images and facts) can be freely used under Attribution-ShareAlike license, unless stated otherwise. Cite this article:
A. H. Stephens State Park Facts for Kids. Kiddle Encyclopedia.