Crawfordville was founded in 1825 as the seat of the newly formed Taliaferro County. It was incorporated as a town in 1826 and as a city in 1906. 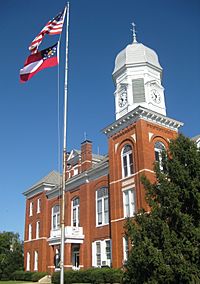 There were 260 households out of which 25.0% had children under the age of 18 living with them, 32.7% were married couples living together, 26.2% had a female householder with no husband present, and 37.3% were non-families. 35.0% of all households were made up of individuals and 19.6% had someone living alone who was 65 years of age or older. The average household size was 2.20 and the average family size was 2.82.

Crawfordville was the birthplace and home of Alexander H. Stephens, who served as a U.S. Congressman, Governor of Georgia, and most notably as Vice President of the Confedrate States of America, 1861–1865. Stephens' home, Liberty Hall, is preserved as a museum and is a part of the A. H. Stephens Historic Park, a Georgia State Park located in Crawfordville.

Crawfordville is also the birthplace of Michael H. Rhodes, a radio and television personality that worked for Seattle based KING broadcasting during the 1940s–1980s alongside other famous Northwest greats: JP Patches and Stan Boreson.

The movie Sweet Home Alabama was partially filmed in Crawfordville. It includes the historical Taliaferro County Courthouse in one scene, as well as a scene with Reese Witherspoon walking down Main Street.

The movies Coward of the County with Kenny Rogers, Get Low with Robert Duvall, and the 1978 TV movie Summer of My German Soldier were filmed here.

All content from Kiddle encyclopedia articles (including the article images and facts) can be freely used under Attribution-ShareAlike license, unless stated otherwise. Cite this article:
Crawfordville, Georgia Facts for Kids. Kiddle Encyclopedia.