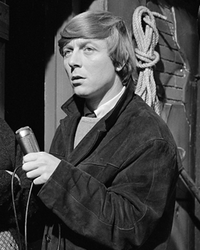 Aart Staartjes (1 March 1938 – 12 January 2020) was a Dutch actor, director, television presenter and documentary maker. He was born in Nieuwendam, Amsterdam. He is best known for his role as Meneer Aart on Sesamstraat, the Dutch co-production of Sesame Street. Staartjes also presented the yearly arrival of Sinterklaas in the Netherlands.

On 10 January 2020, Staartjes was injured in a car accident. Two days later, he died of his injuries in Groningen. He was 81.

All content from Kiddle encyclopedia articles (including the article images and facts) can be freely used under Attribution-ShareAlike license, unless stated otherwise. Cite this article:
Aart Staartjes Facts for Kids. Kiddle Encyclopedia.