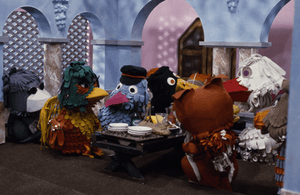 Some characters of the series 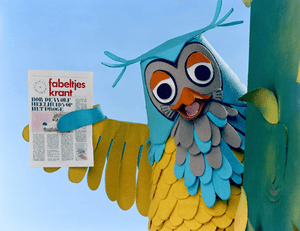 Fabeltjeskrant (or De Fabeltjeskrant, Dutch for "The Fables Newspaper") is a Dutch children's television series featuring puppetry and stop motion. Created in 1968 by Leen Valkenier [nl] and produced by Thijs Chanowski (1st series) and Loek de Levita (2nd series), it ended in 1989 and was broadcast on the Dutch and Japanese channels NOS, RTL 4 RTL 8 and NHK and on Belgian channel VRT. From 1973 to 1975 it was broadcast also in the United Kingdom, on ITV, with the title The Daily Fable.

Each episode is based upon fables of Jean de La Fontaine, Aesop, Phaedrus and also by the series' scenographer Leen Valkenier. The main character, the owl "Meneer de Uil", introduces each episode reading a fable to other characters upon a tree. The setting is a forest inhabited by different anthropomorphic felt animals. The first episode was broadcast on 29 September 1968 on NOS.

All character surnames are referred to their species.

These character were not part of the first three series.

The show was adapted in some other countries under the following titles:

In 1970, a film version, Onkruidzaaiers in Fabeltjesland, premiered in theaters.

In 2007 a musical adaptation was created by Ruud de Graaf and Hans Cornelissen.

In November 2017, a new 3D animated series was announced. It was broadcast in 2019 on Netflix in the Netherlands.

In 2018 a book, an exhibition and a movie were launched to celebrate the 50th anniversary.

All content from Kiddle encyclopedia articles (including the article images and facts) can be freely used under Attribution-ShareAlike license, unless stated otherwise. Cite this article:
Fabeltjeskrant Facts for Kids. Kiddle Encyclopedia.