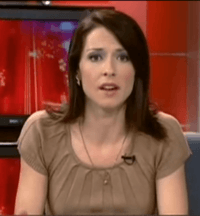 Abigail Suzanne Martin (born September 6, 1984) is an American citizen journalist and presenter. She hosts the web series The Empire Files. Martin was born in Oakland, California.

Martin was a 9/11 conspiracy theorist. She hosted Breaking the Set on the Russian network RT America from 2012 to 2015. Martin also works on the board of directors for the Media Freedom Foundation. In 2015, Martin launched The Empire Files, an interview and documentary series, hosted by Telesur.

All content from Kiddle encyclopedia articles (including the article images and facts) can be freely used under Attribution-ShareAlike license, unless stated otherwise. Cite this article:
Abby Martin Facts for Kids. Kiddle Encyclopedia.