Acanthophis is a genus of elapid snakes. Commonly called death adders, they are native to Australia, New Guinea and nearby islands, and are among the most venomous snakes in the world. The name of the genus derives from the Ancient Greek akanthos/ἄκανθος ('spine') and ophis/ὄφις ('snake'), referring to the spine on the death adder's tail.

Seven species are listed by ITIS, though it remains unclear how many species this genus includes, with figures ranging from 4 to 15 species being quoted. 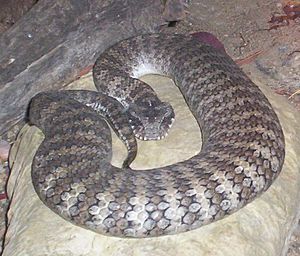 Death adders are very viper-like in appearance, having a short, robust body, triangular shaped heads and small subocular scales. They also have vertical pupils and many small scales on the top of the head. Their fangs are also longer and more mobile than for most other elapids, although still far from the size seen in some of the true vipers. Despite their name, they are not related to adders, which are members of the family Viperidae, and their similar appearance is due to convergent evolution.

They normally take 2–3 years to reach adult size. Females are generally slightly larger than the males. They can also be easily distinguished from other Australian snakes because of a small, worm like lure on the end of their tail, which is used to attract prey. Most have large bands around their bodies, though the color itself is variable, depending on their locality. Colours are usually black, grey or red and yellow, but also include brown and greenish-grey.

Unlike most snakes, death adders do not actively hunt, but rather lie in ambush and draw their prey to them. When hungry, death adders bury themselves among the substrate. This may be leaf litter, soil or sand, depending on their environment. The only part of themselves they expose are their head and their tail, both generally very well camouflaged. The end of the tail is used for caudal luring and when wiggled, it is easily mistaken for a grub or worm. When the snake's prey attempts to seize it, the death adder strikes. Although it has been claimed to have the quickest strike of any snake in the world, this topic has not been well enough studied to make reliable comparisons.

Death adders can inject on average 40–100 mg of highly toxic venom with a bite.

A bite from a death adder can cause paralysis which seems minor at first but can cause death from a complete respiratory shutdown in six hours. Symptoms of envenomation can be reversed through the use of death adder antivenom, or using anticholinesterases, which break the synaptic blockade by making acetylcholine more available to the parasympathetic nervous system, thus mitigating the effects of the venom.

Before antivenom was introduced, it is reported that about 50% of death adder bites were fatal. Deaths are much rarer nowadays as the anti-venom is widely available and the progression of envenomation symptoms is slow.

All content from Kiddle encyclopedia articles (including the article images and facts) can be freely used under Attribution-ShareAlike license, unless stated otherwise. Cite this article:
Acanthophis Facts for Kids. Kiddle Encyclopedia.