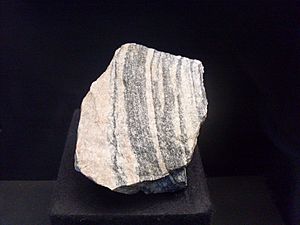 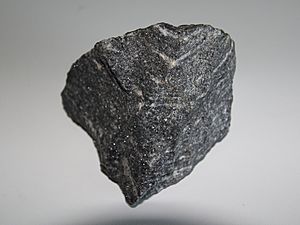 The Acasta Gneiss is a tonalite gneiss in the Slave craton in Northwest Territories, Canada. The rock body is exposed on an island about 300 kilometres north of Yellowknife. The rock of the outcrop was metamorphosed 3.58 to 4.031 billion years ago and is the oldest known intact crustal fragment on Earth.

First described in 1989, it was named for the nearby Acasta River east of Great Bear Lake. The Acasta outcrop is found in a remote area of the Tłı̨chǫ people land settlement. It is the oldest known exposed rock in the world.

The metamorphic rock exposed in the outcrop was previously a granitoid that formed 4.03 billion years ago, an age based on radiometric dating of zircon crystals at 4.031 Ga. The Acasta Gneiss is important in establishing the early history of the continental crust. Acasta Gneiss was formed in the Basin Groups unofficial period of the Hadean eon, which came before the Archean: see Timetable of the Precambrian.

In 2008 an age of 4.28 billion years was reported for an outcrop in the Nuvvuagittuq Greenstone Belt on the eastern shores of Hudson Bay, 40 kilometres south of Inukjuak, Quebec, Canada. However, the dating method used did not involve similar radiometric dating of zircon crystals and it remains somewhat contentious whether the reported date represents the age that the rock itself formed or a residual isotopic signature of older material that melted to form the rock.

All content from Kiddle encyclopedia articles (including the article images and facts) can be freely used under Attribution-ShareAlike license, unless stated otherwise. Cite this article:
Acasta Gneiss Facts for Kids. Kiddle Encyclopedia.