Adelaide of Austria facts for kids

The present Italian pretender is her direct great great grandson.

She was born at the Royal Palace of Milan to Rainer Joseph of Austria and his wife Elisabeth of Savoy. Named Adelaide, or known as Adele in the family, she held the title of Archduchess of Austria. Her father was the Viceroy of Lombardy-Venetia and was a son of the Holy Roman Emperor Leopold II and Maria Luisa of Spain. Her mother was a member of the House of Savoy and a daughter of the then Prince of Carignano, the head of the junior branch of the House of Savoy who ruled the Kingdom of Sardinia.

On 12 April 1842, at the Palazzina di caccia di Stupinigi, she married Victor Emmanuel of Savoy. The marriage was used to strengthen relations between the House of Savoy and that of the House of Habsburg but was viewed by many people of the time to increase Austrian power in Italy.

Victor Emmanuel was her first cousin and heir apparent to the King of Sardinia. He was styled the "Duke of Savoy" prior to succession. Adelaide thus took on the style of "Duchess of Savoy". She maintained her style of Imperial & Royal Highness till she became Queen.

Her husband's mother Maria Theresa of Austria had great influence over her son throughout his life. Her mother-in-law was also her first cousin, both she and Adelaide being grandchildren of Emperor Leopold II. Adelaide and her husband of thirteen years had eight children.

Adelaide was a quiet and religious woman and had had a strict upbringing, she was a loving wife and frequently would give to charity. 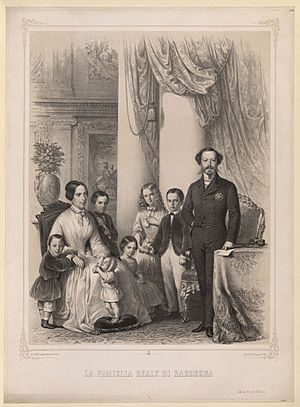 Queen Adelaide with her husband and six older children, ca. 1854

In March 1849 her father-in-law King Charles Albert abdicated after the events of the Revolutions of 1848. Her husband succeeded as Victor Emmanuel II of Sardinia.

During her time as queen consort she had three further children all of which died in infancy. On 8 January 1855 she gave birth to a son who was styled the "Count of Genevois".

Days later Queen Maria Theresa died on 12 January 1855. Adelaide went to the late queens funeral on 16 January and returning to the palace caught a cold. She died four days later at the Royal Palace of Turin having had an acute attack of Gastroenteritis.

She was buried at the Royal Basilica of Superga. 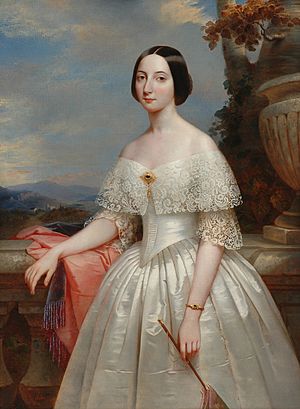 In 1861 her husband would become the first post-unification King of Italy. Her husband wed again to Rosa Vercellana.

All content from Kiddle encyclopedia articles (including the article images and facts) can be freely used under Attribution-ShareAlike license, unless stated otherwise. Cite this article:
Adelaide of Austria Facts for Kids. Kiddle Encyclopedia.